I recently decided to reward myself for a difficult job completed by splurging just a little on the 31032 Red Creatures set. It’s a nice little set; I’m particularly fond of the dragon and the scorpion is very nice (though the biologist I trained as cringes at its wrong number of legs), though I’m less fond of the snake.

Anyway, having followed typical pattern and built the three things there were instructions for, I decided to see about a fourth alternate.

I’m quite into dinosaurs and other prehistoric beasties, and I was initially thinking about adapting the dragon into a Tyrannosaurus rex, but then I decided that was too similar. Rip the wings off and you virtually have it. So after rejecting the idea I decided to have a go at that monster pterosaur, the Quetzalcoatlus.

Quetzalcoatlus is awesome in its own right. I mean, the thing stands on its feet and wing-arms as tall as a giraffe, and it flew! And they think it was an aggressive predator that ate some of the smaller dinosaurs, and the young of larger ones.

Anyway, here’s my Lego Quetzalcoatlus, posed on the ground and with the wings and legs arranged for flight. The head might have been more streamlined if I’d had a red 1×1 double SNOT brick to work with for attaching the eyes, but a) I don’t have one of those, and b) I wanted to use only the bricks found in the 31032 set. 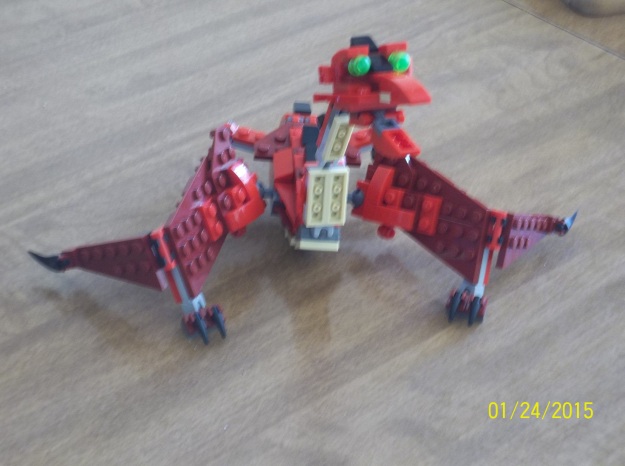 Sorry about the shaky camera. I got better with taking the photos, really I did. 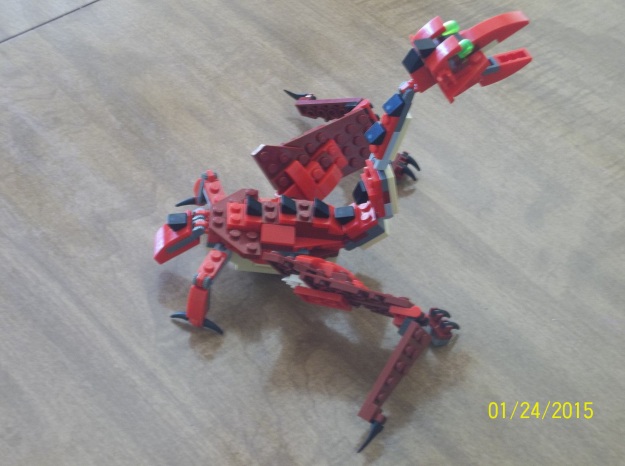 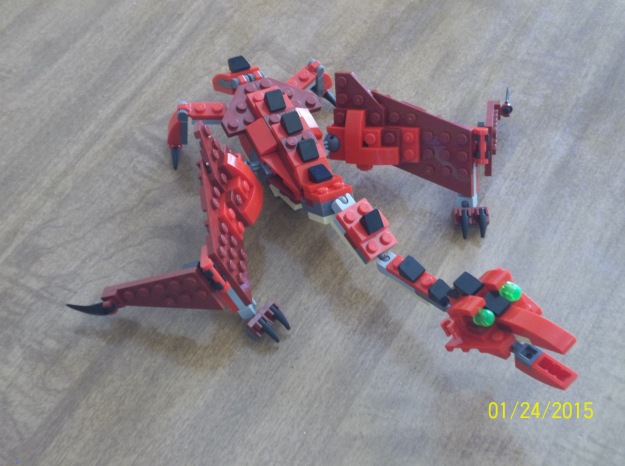 Arranged for flight. Broader wings might have been a little truer to life, but you work with what you have. 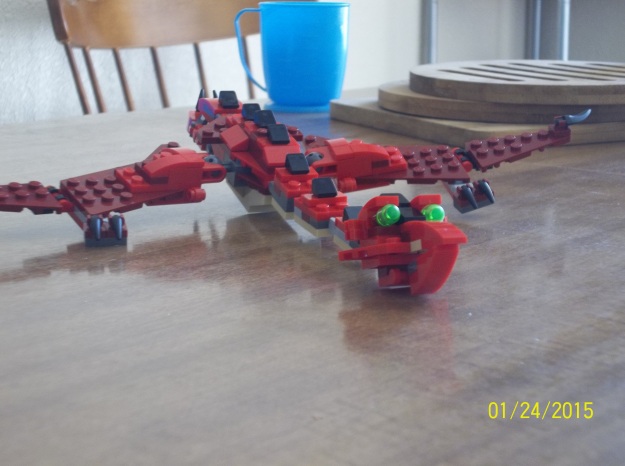 As a boy growing up in Britain in the 1970s and 1980s, Gerry Anderson’s puppet-based TV shows were part of my staple television diet. Shows like Stingray with its high-tech submarine, Joe 90 with its child spy and rotating orange-peel mind-altering machine, and Captain Scarlet, of which my memories are far less clear. But chief among them all was Thunderbirds, which featured the adventures of the five brothers of the secretive high-tech organisation International Rescue, whose mission was to engage in rescue operations where no-one else could reach.

Thunderbirds is excellently suited to being modelled in Lego. It features a lot of large and advanced vehicles with all sorts of clunky, complex mechanical sequences. It has a fairly rosy, child-friendly approach to the future – the 2065 of Thunderbirds is no dystopia – and most of all, its various vehicles are mostly brightly-coloured, and thus well-suited to being recreated in bricks.

The Mole is one of the most iconic of International Rescue’s various brightly-coloured vehicles. Who could forget that canary-yellow burrowing machine that was apparently propelled by rockets because it was too cool for wheels?

So I decided to have a go at making one in Lego.

The Mole. So cool it has to be propelled underground by rockets

The object of this exercise was not so much super-realism in a massive replica, but something approaching what might be done if an actual Lego set might be produced as part of a Thunderbirds theme.

Accordingly, I’ve tried to make this a play-with-able model. The Mole itself opens up to reveal a seat for a minifigure. It sits on the tracked cradle, which raises and lowers to launch the tunnelling machine into the ground. The drill bit rotates. You’d want some sort of sticker or pre-printed control layout for the inside of the half-cylinder if it were a real set, but this is as close as I can get to what might be done.

And it’s fairly faithful to the original. I’m pleased with it.

That’s supposed to be Virgil Tracy in front

Rear of the burrowing vehicle

This is my first really big digital Lego model.  Naturally, it’s a spaceship.  It has a sort of “Classic Space goes to war” vibe that I’m quite pleased with, and is obviously largely inspired by seagoing battleships and their spacegoing equivalents.

After aspect from below

I built the rear of the ship so that it would open up to reveal an internal shuttlebay, but being unfamiliar with some of the foibles of MLCad, the way I did it was completely unconducive to grouping all the door bricks together into a single unit that could be rotated open together.  I know better now, but I was building as if it were real bricks and doing what I would have naturally done.  So I had to tear the back off in order to show you the inside:

Inside the boat bay showing the flight operations deck

As a child, my Lego building was almost all about space. I grew up on the original Classic Space theme, with the awesome 928 Space Cruiser and its cohorts. The classic blue-brick construction with yellow windows is indelibly etched on my subconscious as “appropriate colour scheme for space hardware”.

So when I downloaded my digital Lego building program, my inspiration naturally turned to making a spaceship.

I wanted to make a really big ship, but being unfamiliar with MLCad and its ins and outs, I thought it might be wiser to start with something a little smaller. Besides, I’d need a standard shuttlecraft for my Lego space fleet.

This is the result. A nice heavy-duty shuttlecraft in Classic Space colours, able to transport up to 20 minifigures at one time.

The octagonal rings on the sides are what I’m using as a standard docking ring for my minifig-scale Classic Space fleet, and they actually work, sort of. The half-cylinder revolves to make an airlock-style door (though I couldn’t quite manage to make the door be a full cylinder that would open, so when it’s halfway rotated all the air would rush out).

I’m naming it after my favourite constellation, so this is the Orion Transport.

Side view. Note the helmetless crew in the pressurised passenger compartment as well as the helmeted flight crew.

I downloaded the MLCad free digital Lego building program this last summer, and in doing so opened a new chapter in my personal Lego story.

As a child, Lego was my favourite toy, and I’m old enough that one of my first prized “big” sets was the 1979 classic, 928 Space Cruiser and Moonbase. But in my teenage years, a combination of parental and peer pressure resulted in me giving away my whole mountain of bricks.

I traveled a lot in my early adulthood, and then when I did settle in one place, the house in which I lived was carpeted in an ancient, thick shag-pile carpet in which entire nations of pygmies still roam to this day. The amount of Lego which could potentially get lost in such a carpet is probably staggering.

Recreating that childhood mountain of Lego seemed like a non-starter. On the rare occasions I thought about it, I put the idea of actually becoming a builder again firmly behind me.

While we’re on the subject, let me address the perspective from which I approach Lego.

Among AFOLs (Adult Fans Of Lego), there seem to be two kinds: those who are primarily collectors and those who are primarily builders. Collectors’ aim is to obtain rare and hard-to-find sets, to have and build all of the sets in a particular theme. Builders are less concerned with set numbers and more concerned with actually making things. There’s some overlap, but in general you seem to be either a collector or a builder.

I suspect there’s some of that even in the way different children approach Lego. I had friends who would build the model shown on the box, play with it a bit and then set it on a shelf for months at a time.

Not me. I’m definitely in the second category. I seldom built the thing on the box more than once, and when I’d built it, it seldom stayed intact for more than a day. There were too many original creations in my head jostling for the use of those cool bricks.

So I’m approaching this rediscovered interest as very much still a builder. And so a digital Lego program lets me build some of the things I can imagine even when I don’t yet have the physical bricks to make it work.

I’m intending that this blog be a platform for me to share my creations, whether digital or physical.

This blog is called “Square Feet”, which has a double meaning. Not only does it refer to the shape of a standard Lego minifigure, but it also references a standard measurement of area from my day job as a construction worker. Apparently, I’m a Builder. It’s what I do.

It being still close to Christmas, I’m going to kick things off by sharing the winter village that I didn’t quite get finished in time for Christmas.

The village sign. This is a private joke, because where I grew up was “Ewell village”, pronounced almost exactly the same as “Yule”

A view over the back showing the military band playing carols

Down the high street

The church. Like in the real Ewell, it’s a St. Mary’s

General view from the north side

View from the east side