As a child, I never sorted my LEGO bricks. They existed in a glorious jumble making a second carpet in my room and frustrating my mother’s attempts to hoover.

I had enough bricks to have made sorting them a good idea, but somehow the idea just never occurred to me.

Now that I’m grown, and have to build around things like a day job, sorting seems a lot more urgent.

My life is being complicated, however, by a 4-year-old son who treats a LEGO model like a three-dimensional jigsaw puzzle, and a wife who doesn’t do LEGO.

My other kids are more like I was as a child: they want to build their own thing. My son does 200-piece jigsaw puzzles by himself. To him, a LEGO set is an exercise in Following The Instructions to put together the puzzle… over and over again.

Basically, he wants to build what’s on the box. And my wife, who is at home with him all day and who doesn’t build (and doesn’t like all the tiny fiddly elements) wants to bag up the pieces by the set they belong to.

I love my wife and I don’t want her to be frustrated having to keep on helping him find this or that piece that he’s looking for to build the dragon, or the monkey, or the logging truck or whatever. But while putting all the pieces of one set together will help with his particular style of building, it’s going to frustrate the ever-living crap out of me.

But I’m not there as much. My son is.

I think that if the pieces are sorted effectively into their various types, he’ll get the idea pretty quick, and it’s surely much easier than trying to remember which set had a 1×2 by 2×2 descending new-style angle bracket to replace the Lost Piece from the Rainforest Creatures set.

We’ll try it my way first.

This is basically a larger, cooler version of the 1987-vintage 6894 Blacktron Invader. The Invader is my favourite Blacktron ship, and I couldn’t resist trying out an updated version using modern SNOT-heavy techniques.

I also couldn’t resist making it larger in order to incorporate more coolness. I groove to bigger models. 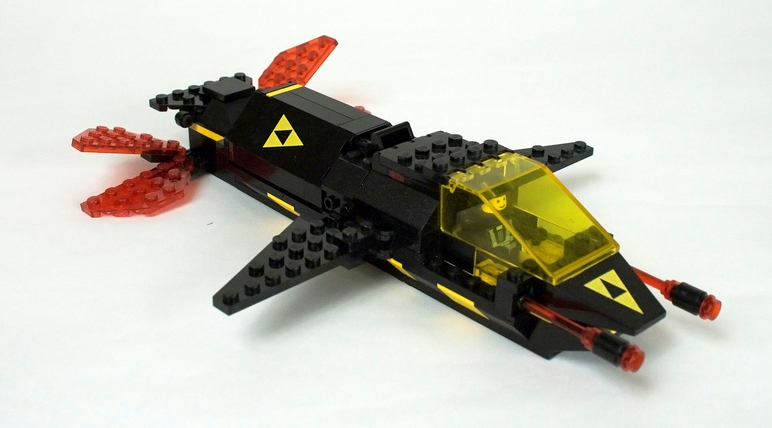 Like the Classic Blacktron Invader, it’s built in three sections that fasten together with pin fastenings. I built the engine section first, but I already had the basic concept for what I wanted to do with the middle cargo module, and that determined the extra width, which meant that in order to keep the basic lines of the original I was going to end up with a larger model. That’s why I’ve named this an “Intruder” rather than an “Invader MOC“, though I kept a similar name.

Where the original had transparent red plate wings, I went for spheres held in claws. I always thought of the engine section’s wings as something to do with the vessel’s power systems, but on the other hand, the Invader was the only ship that had them, so who knows? Anyway, I think my globes are cooler, and fit better with the sinister feel of the Blacktron.

The Intruder has an opening central module with disguised weaponry

The middle section looks like a standard cylindrical cargo module similar to what the original had (except the Intruder’s is rounded where the Invader had a faceted design). It looks like it, that is, until the whole thing opens up to reveal a powerful array of hidden weaponry. It has rapid-firing laser pulse clusters and red beam lasers.

With the modular design of Blacktron ships, in fact, there could easily be four or five different middle sections with different armaments.

The cockpit section was in some ways the most challenging. As my first SNOT cockpit, it was a challenge to get the angled design to work with the pin connectors, but I figured out a solution. Like the Invader, the wings are angle-adjustable, and the cockpit can be attached directly to the engine section for a short version.

I couldn’t resist adding what seems to be becoming a standard undercarriage design for me. With two landing legs on the wings and one on the engine section, the Intruder can set down almost anywhere.

It seems like even in Ninjago, most LEGO dragons look like the Western breed. The bat-like wings, the muscular body, the fire-breathing, all Western dragon features.

Eastern or Asian dragons are a bit different. More serpentine, usually not winged (but still capable of flight), moustachioed, bearded and antlered.

I decided to see what I could do to construct an Asian-style dragon.

This is the result.

I’ve incorporated a lot of colours – for once deliberately – trying for the sort of rainbow effect that might be expected from a creature associated with both fire and water.  (This was also a necessity because of needing the bricks, but if I’d had unlimited bricks in all colours I still would have made it multicoloured).

I’d have liked to have used whip pieces for the moustache filaments, but I only have one, and it wasn’t going to work unless I had two. So I used antennas. You Work With What You Have.

Closeup of the head

Closeup of the tail tip

I hope you like him. He was fun to build.

The dragon together with some Ninjago ninjas for scale

One-man hovering things. Call them jetbikes, speeder bikes, antigravs or hoverspeeders, a lot of sci-fi universes have them.

As a child, I used to use the old-style spindle-shaped landing skids to build them for my spacemen. Landing skid, 2×4 plate, steering wheel at one end and side-facing headlight bricks at the other. Add a couple of megaphones as combination steering jets and lasers, and a couple of round transparent plates on the spindle, and there you are.

The Mark 1 Hoverbike as made by my childhood self

The annoying thing about them was that they fell over all the time. Even carpet won’t make a top-heavy model balance on a single round spindle. I never did figure out a way to cure the issue.

So the other day I decided to build an updated hoverbike. In LDD, because I don’t have any spindle landing skids any more.

It’s a nice little model, and makes use of some of the new bricks (by which I mean, “I did not have these as a child”) like the 1×2 angle plate, but it’s still very much a derivative of those childhood designs.

The Mark 2 Hoverbike. Same, but different

Then I got the LEGO Ideas Exo-Suit and the book Brick Wonders for my birthday last Friday, and armed with a raft of new techniques I decided to radically overhaul the whole hoverbike idea and remake it from the ground up.

Here’s the new version, which is much cooler:

Full-on SNOT techniques and greeble-heavy construction style. Antigravity plates inspired by the head of the robot turtle from the Exo-Suit, rather than the spindle. And a new style of personal laser blaster that looks far better than the old single-piece torch type.

I can almost build this in real bricks, but it would be a horrible colour mashup, which I hate doing. And I’d need a 1×1 brick with studs on 2 sides.

Stand by for further coolness, because I also got Peter Reid and Tim Goddard’s book LEGO Space: Building the Future for my birthday, and it’s an amazing visual reference of unexpected connectivity.

My whole building style is about to change…

the Brass Monkey mark one

LEGO and Steampunk. A match made in, well, if not quite heaven, then at least some sort of Wellsian-themed Buildtopia.

Sooner or later, everyone seems to try their hand at some sort of awesome steam-driven mechanical marvel. In many ways, LEGO is made for it, especially with all the modern colours. Flame orange and gold make acceptable brass substitutes, brown is great for wood, leather and more tarnished brass and bronze, the various greys and metallic silver make excellent steel, pewter and iron finishes. And all of the diverse array of modern greebles are superb theme decorations.

My grandfather worked as a signalman on the railways in the old pre-British Rail days of the London and North-Eastern Railway, and afterwards, so you might say steam is in the blood. His Hornby model railways were never my thing, though; I wanted spaceships and futuristic technology.

I didn’t know about Steampunk back then. Jules Verne and HG Wells were cool, but in my boyish imagination I pulled their creations out of the 19th Century milieu in which they had been set and re-imagined them for the futuristic technology they obviously ought to use. The Martians’ Heat Ray was obviously some kind of laser, while the Nautilus was a high-tech submarine with electric torpedoes and probable nuclear power.

Well, now I know about Steampunk. And it seemed time for a Steampunk-themed LEGO creation.

I seem to have fallen in love with LEGO ball joints. My daughter has the Kai’s Fire Mech set, my son has the Forest Creatures set and I have the 31032 Red Creatures set, so we have quite a few of them now. And what I’m particularly struck with are the mech-building possibilities.

So, a Steampunk mech? You bet!

This didn’t start out as necessarily a Steampunk creation, though it didn’t take me long to decide to push it in that direction. We have a lot of brown, grey and black bricks, and the gold from Kai’s Fire Mech. It just seemed to call out to be Steampunkified.

Brown for the feet, then, with gold and black highlights.

Use the bare Bionicle double-ended ball holders for the arms and legs, without adding the red cover parts that Kai’s mech uses.

2×2 horizontal half-cylinders on the back as piston or boiler parts.

After that it was just a case of adding more greebles.

Horse harness becomes organ-pipe steam funnels. The tall cylinders with the handles become – well, originally I think they were going to be funnels, but now I think they’re piston housings. Hanging chains, because why not?

I’d have liked to have all-gold fingers, but we don’t own that many. Perhaps I might spend some of my birthday money on Pick-a-Brick…

Still, here it is: my first LEGO Steampunk creation.

As far as naming goes, I thought about calling it the “Spindle”, because of the flywheels, but that didn’t seem quite right. Then the name “Brass Monkey” slipped into my conscious mind and said “This is what this mech is called”.

It makes sense. As a sort of Steampunk ancestor of a Tony Stark “Iron Man” suit, both “Brass” and “Monkey” seem to work.

This, then, is the Mark One Brass Monkey. Driven, I decided, by a character by the name of Lady Paracelsus, from a Steampunk story I started to write a while back.

After the Brass Monkey was completed, I got given the wonderful LEGO Ideas Exo-Suit for my birthday on Friday. So here is Yve in the Exo-Suit, waving hello to her fellow mech-driver Lady Paracelsus in the Exo-Suit’s Steampunk ancestor.