The Blacktron vessel Angel of Chaos is a space warship of the Blacktron Alliance. Featuring a main armament of three massive gamma-ray lasers, it is one of the most powerful ships in Alliance service.

The power system is a second-generation version of the experimental system pioneered by the Blacktron Invader, and is also featured on the second-generation Intruder (see previous post). The improved power management system allows for considerably higher power usage, but at the cost of crew radiation exposure levels that the Galactic Federation deem unsafe.

The power levels on Angel of Chaos are high even by these standards, and the gamma-ray lasers are of a type more typically found on the largest hypercruisers and dreadnoughts. Radiation exposure levels are also correspondingly high, and the crew of the “Angel” consider themselves a breed apart.

A quartet of powerful engines drive this ship at high velocities through both normal space and hyperspace.

The Angel of Chaos is partly an experiment with radial construction, and partly a homage to the Liberator, the spaceship from a largely forgotten British sci-fi TV show from the ’70s called “Blake’s 7”. Some day I’ll attempt the spherical drive unit from that original ship, but I’m not that good yet.

I think the radial technique would actually work better on a larger model, but not knowing that I could successfully pull it off, I was reluctant to invest the time involved in building a massive model.

The most satisfying part of this model for me is the way I managed the transition from 12-fold radial to 8-fold radial to more regular unidirectional SNOT construction.

The three turrets around the main hull rotate as well as elevating, though this is not true of the cockpit guns, which only elevate.

This started out as a steampunk version of the Classic Space 918 One-Man Spaceship, but then I got enthusiastic with the steampunkery.

My Aethership next to its inspiration, the 918 One-Man Spaceship,

The ultimate origins of this model are in my attempt to build a steampunk version of the big 928 Space Cruiser and Moonbase set, but after two aborted tries convinced me that that level of SNOT work was a lot more complex and difficult than I had anticipated, I decided that perhaps the thing to do was to hone my skills on something smaller.

Rear/bottom view with the undercarriage folded

In the course of modifying the design to make it more steampunky, I may have got a little carried away, so that the Classic Space origins of the craft are no longer immediately obvious. Most of this stems from my decision to make it a biplane, but the locomotive-like steam boiler in front doesn’t help either. I also darkened the colours from the Classic Space legacy blue and old grey to earth blue and dark stone grey in order to give it a smokier, less clean-and-shining feel, and made liberal use of metallic gold brasswork, though it still has its proper trans yellow windows.

Still, for all that it’s a pretty nice little steampunk spaceship, and you might be able to see echoes of the original. It has a propeller engine instead of a rocket for flying through the aether, a smokestack where the tail fin used to be, miscellaneous brass gears and a coal bunker around the engine section, and retractable (though sadly not properly stowable) undercarriage. As a first for me, this model incorporates six-directional building in a single structural section (the wing/boilerplate).

Cutaway view showing the interior of the cab. I’ve hidden one wall and the upper win g so you can see it better. 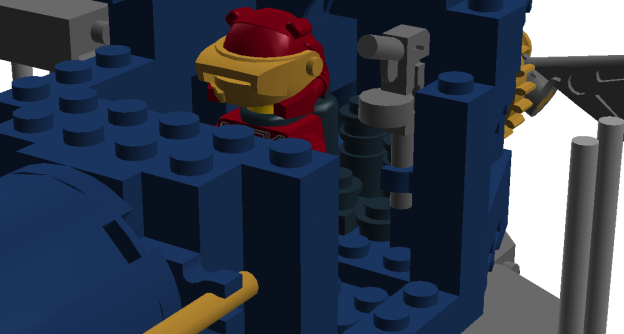 I’m particularly pleased with the interior of the cab, with its firebox, coal bunker, steam gauges and cup of tea for the aethernaut pilot.