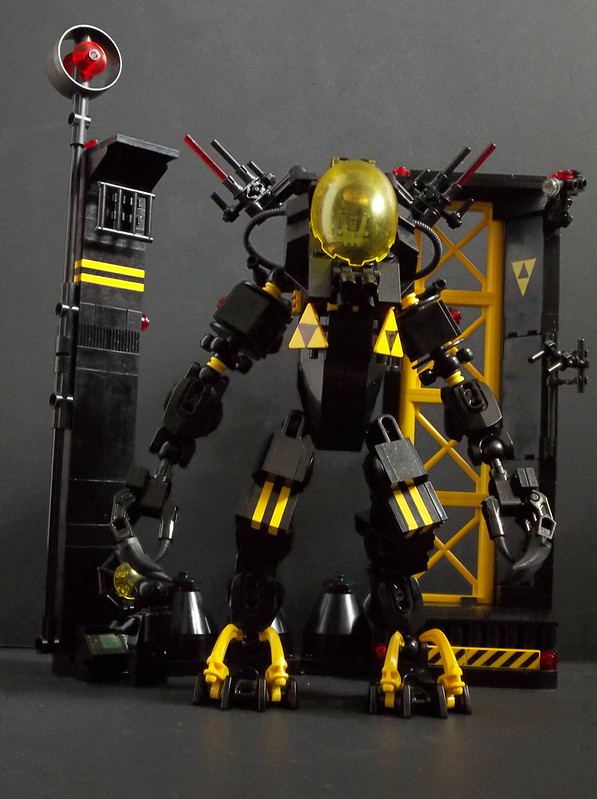 Cernunnos-class mech in its service gantry

The Cernunnos-class mech is a versatile combat walker used by the Blacktron Alliance.

Named after the horned god of Celtic mythology, the Cernunnos derives its name from the antlerlike combination weapons mountings attached to the head area; the possession of antlers being one of the distinguishing marks of both Cernunnos and his later form Herne the Hunter. 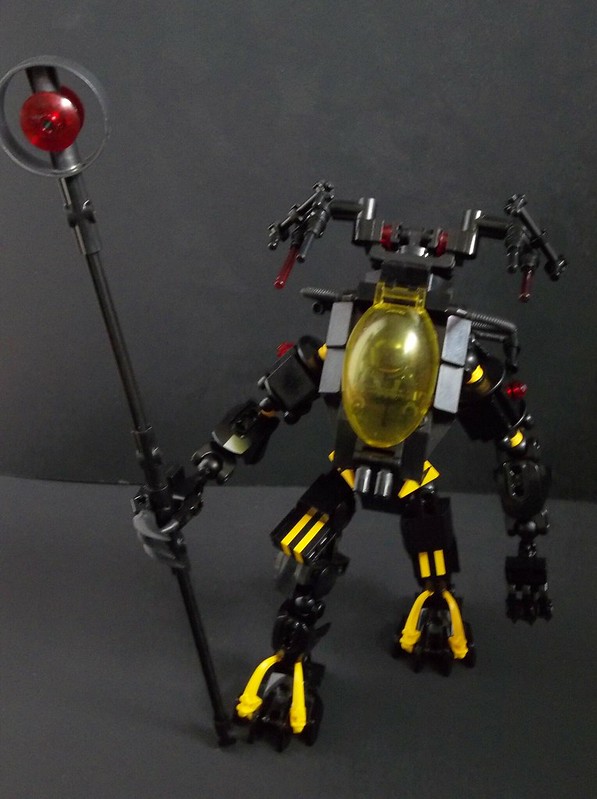 The Cernunnos mech’s versatility means that it is often found performing planetary exploration duties for the Alliance, as the Blacktron tend to have fewer dedicated exploration and science mechs. The chest-mounted quad plasma pulse cannon mounting can easily be exchanged for additional sensors to facilitate this role. 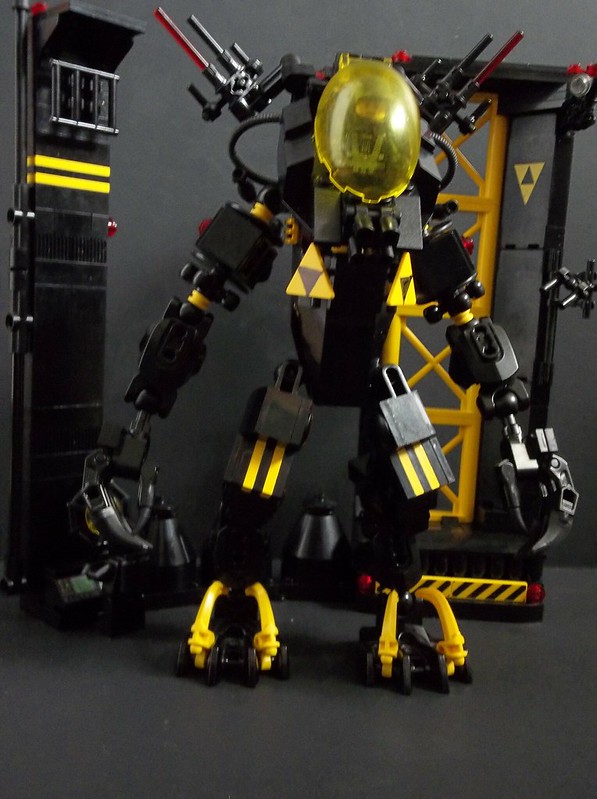 The stafflike device often carried by Cernunnos mechs is a combination of targeting array and a high-powered broad-spectrum energy beam; the device’s supporting pole is also robust enough to serve as a close-in physical weapon in its own right.

Apparently I’m still in Blacktron mode, this time with a mech. Originally this was actually going to be a Blacktron-variant space minotaur mech, which is why I reprised the foot design of the steampunk Mechnotaur. I do like the combination of those large beast foot elements with the reversed clip claws to make a cloven hoof.

However, I couldn’t find a (technically) shoulder-mounted weapon design that looked sufficiently like bull’s horns. The gold prong elements I used for the steam Mechnotaur obviously weren’t going to work with Blacktron I colours, and I didn’t like any of the alternatives I came up with. 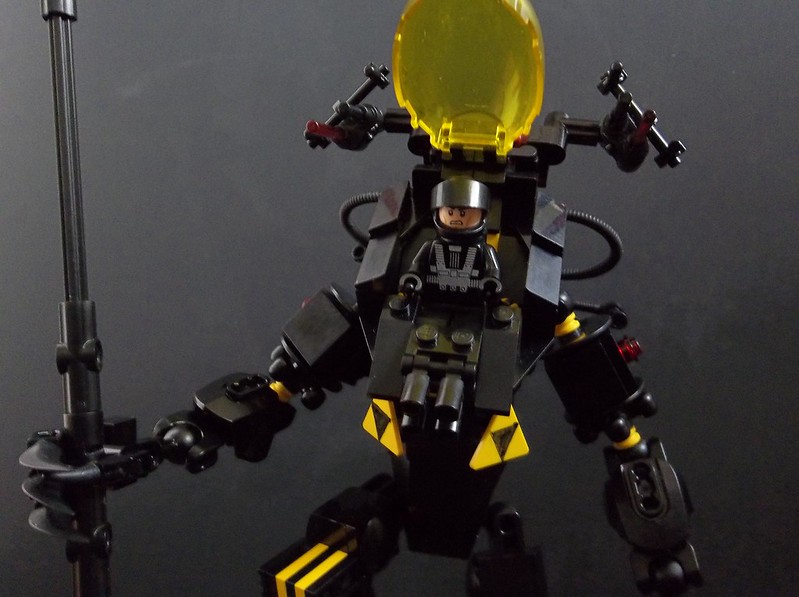 Repositioning the final one of these aborted designs one last time in an attempt to see if it looked any better at a different angle, I was suddenly struck with the thought that it looked a bit like antlers.

“Maybe not a space minotaur then, but a Cernunnos, perhaps,” I mused, and made some additions to the horn design in order to make it look even more antlery.

I’m not sure whether cloven hooves are an attribute of the Celtic horned god, but it does work. Deer have cloven hooves as well as bulls, and I like the way the legs are way too much to mess with. 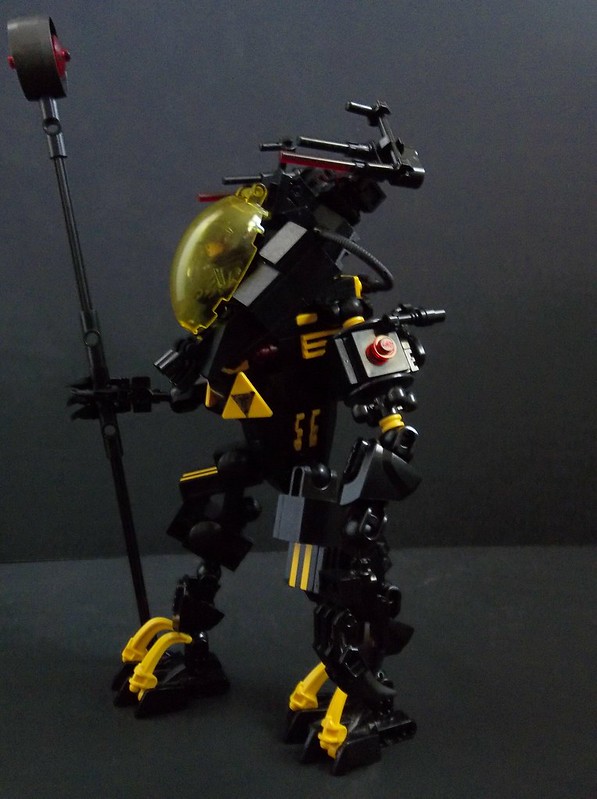 So having settled on a Celtic mythology-themed Blacktron mech, it somehow seemed like it needed a Druidic staff. A mech with a staff seems a bit strange on one level, but I like the look of it so it’s staying. So I have an antlered mech with a ginormous staff weapon.

And I decided to build a sort of servicing gantry to display the model, because I’m finally tumbling to the importance of scenery in displaying a cool model to best effect. 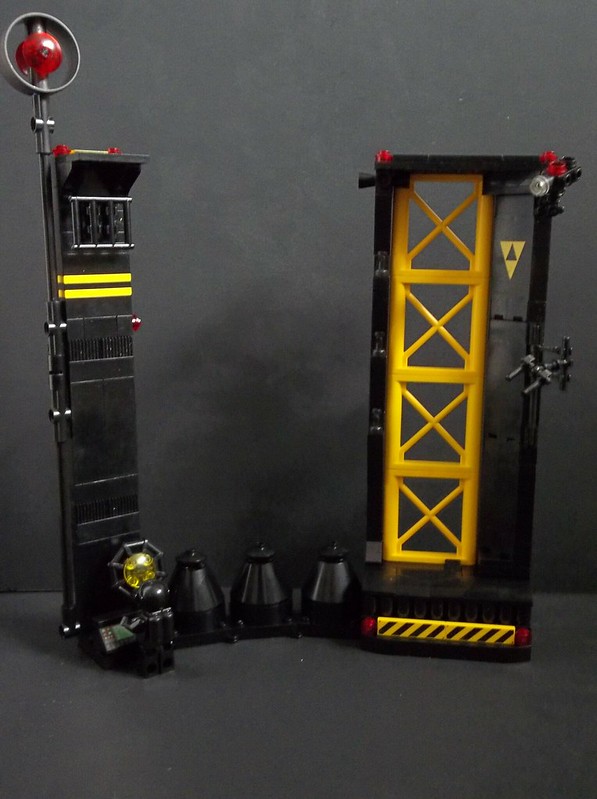 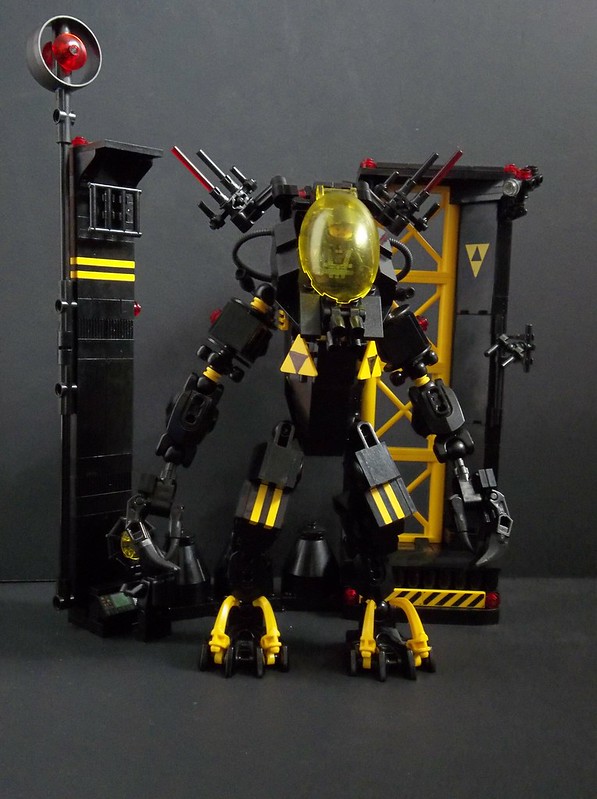 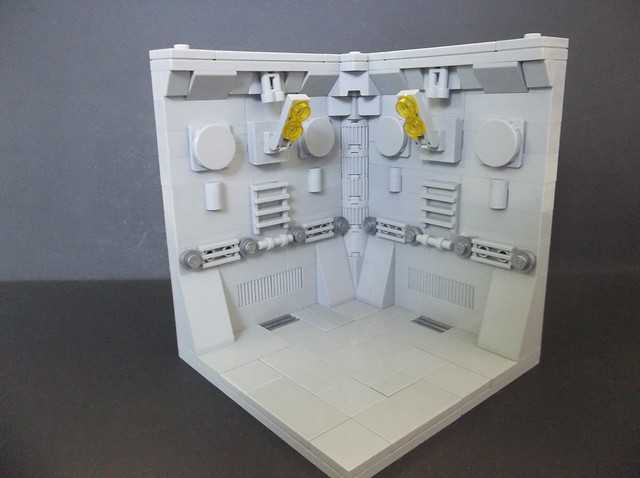 12×12 is a nice size for a scenery square or room corner. It’s big enough that you can exhibit repeating patterns and really give a sense of a larger area, but small enough to be manageable. 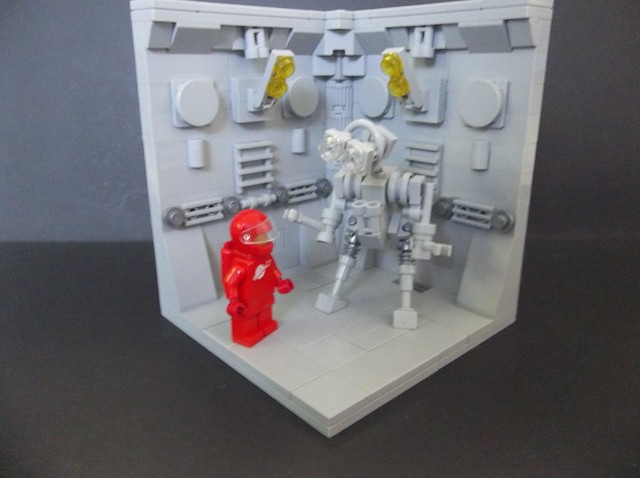 I originally built this to showcase my Classic Space robot George, only to realise that light bluish grey wasn’t necessarily the best background colour on which to display a light bluish grey robot. Honestly, you’d think I was slow-witted or something.

Still, I was quite pleased with my scenery-building, because it’s something I always feel like I suck at or don’t have enough pieces for. And once you have a piece of scenery you can use it for numerous purposes. It doesn’t have to be a display case for any one thing in particular. 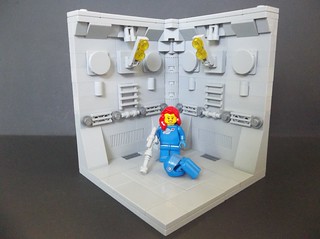 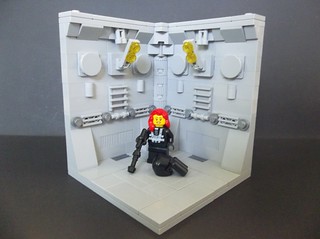 The three 2×2 jumper plates with which I graced the top of the walls were originally placed there because I couldn’t find enough flat tiles just then, but then I realised that it would be quite easy to build a stackable second storey to be held on those 3 studs. 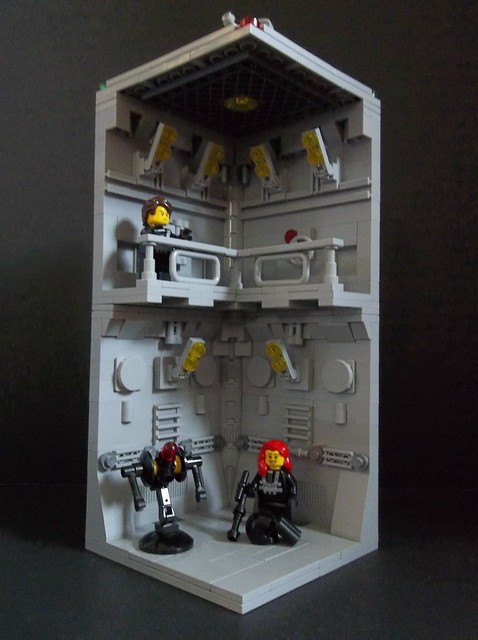 The balcony storey came next, because I liked the idea of an upper walkway overlooking some cavernous room of which this is but a corner. At only 3 studs wide, there’s not a lot of room up there, but it does its job. I think my favourite part of it is the handrail, actually.

After that I built a roof, and then, running low enough on 1xwhatevers in light bluish grey for more walls, I decided to shift colours and go to a rough-hewn dark bluish grey mining area. 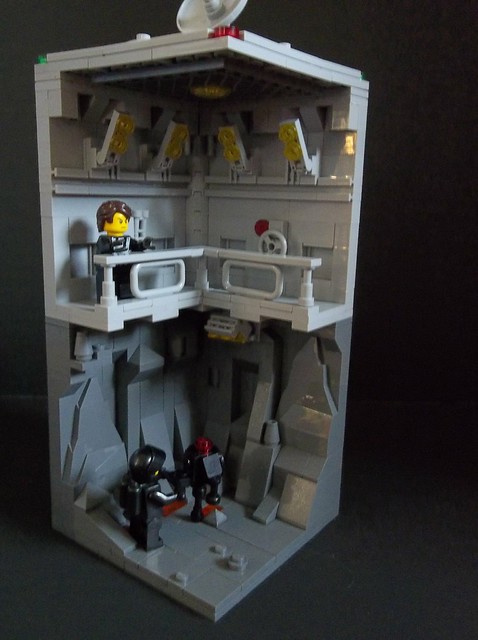 So now I have 3 storeys of stackable modular space scenery, ready for whatever I want to do with them… 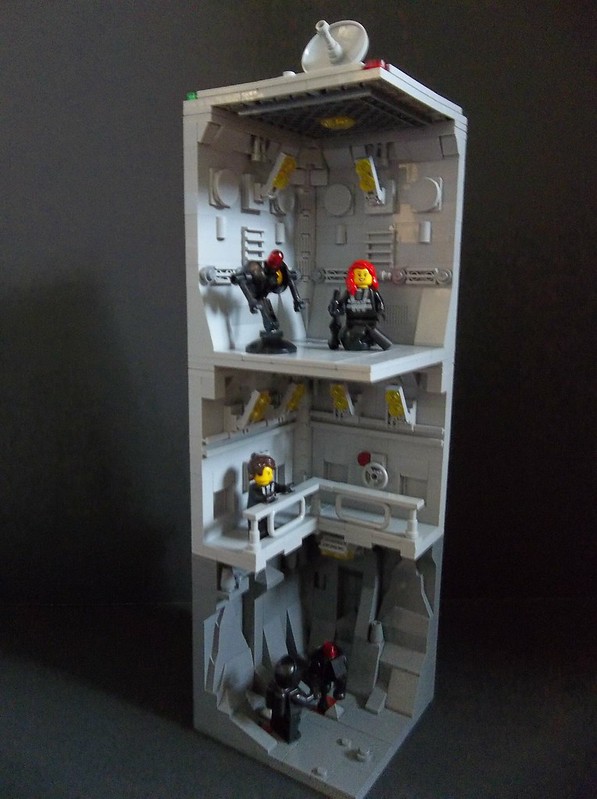 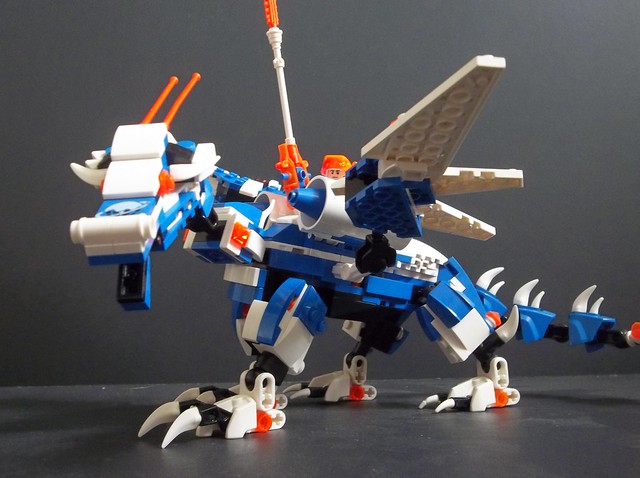 Not my first combination of dragons and space, but definitely my most draconic, this is obviously a dragon of the old Ice Planet 2002 theme.

Ninjago has given us plenty of “elemental dragons” of all sorts of elements including ice, and in the past I’ve personally built “elemental dragons” of Steampunk (on the defunct LEGO Galleries, alas) and Classic Space. I had some ideas about building a Blacktron space dragon (which served as a partial inspiration for the Dragon-class Blacktron battlecruiser) but I’d never considered an Ice Planet elemental dragon before. 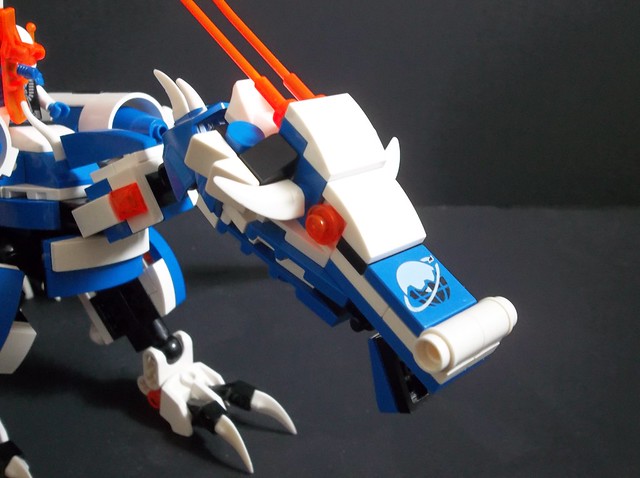 The Elemental Dragon of Krysto is much more definitely a dragon than the fusional Classic Space variety, with a rider rather than a cockpit and those moulded dragon feet elements on its four legs. Still, Ice Planet 2002 did have a lot of open-cockpit vehicles, so I felt less need to enclose the crewman. 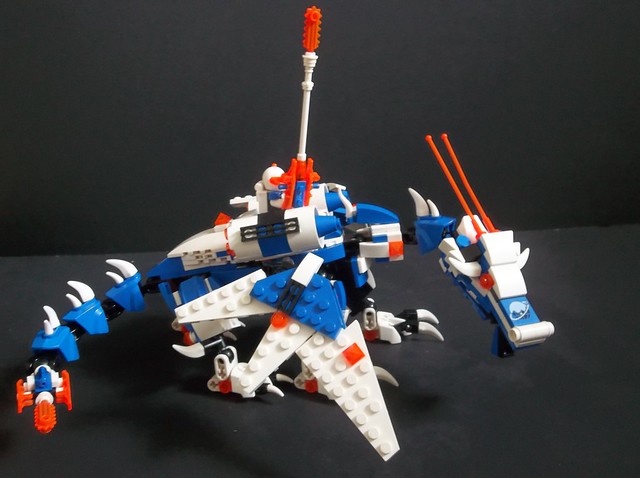 Sized about like the Jay’s Lightning Dragon or the first Zane’s Ice Dragon, about the only concessions to space vehiclehood here are the shoulder-mounted rocket engines and the bits of ice saw and skis at the end of the tail.

Still, you couldn’t mistake it for anything but an Ice Planet dragon with its colours and Celestial Christmas Pudding logos. 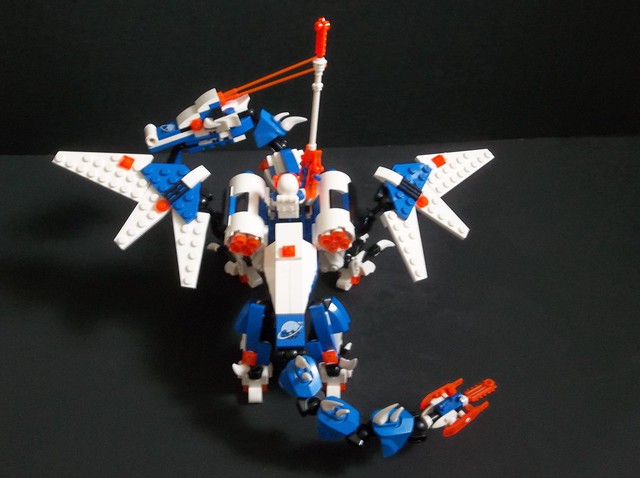 I’m fairly pleased with how this turned out, even with the CCBS elements on the neck and tail rather than being exclusively built. That shouldn’t really feel like a cheat, but somehow it does a bit. 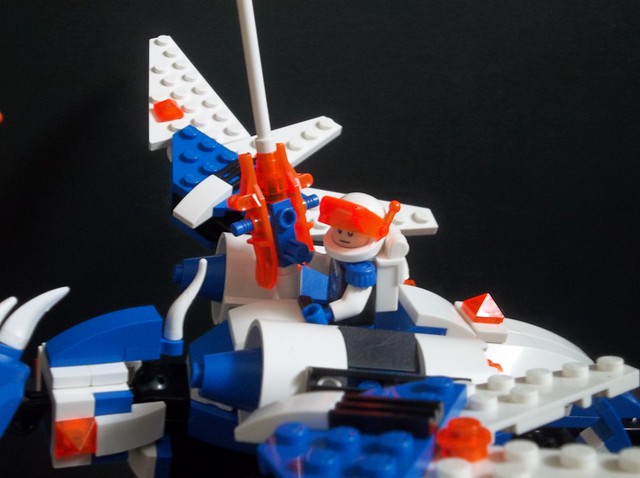 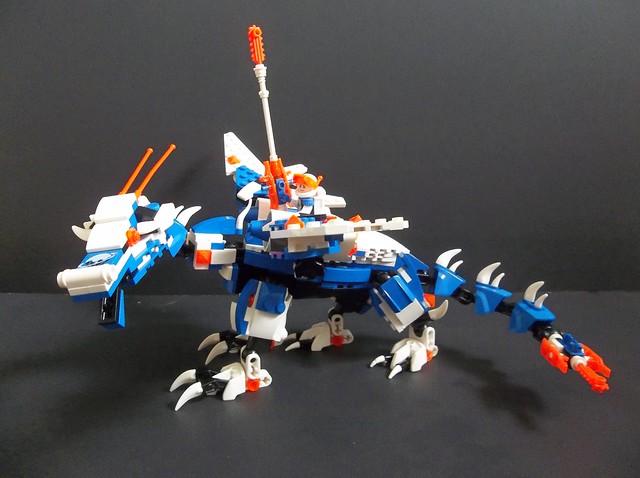