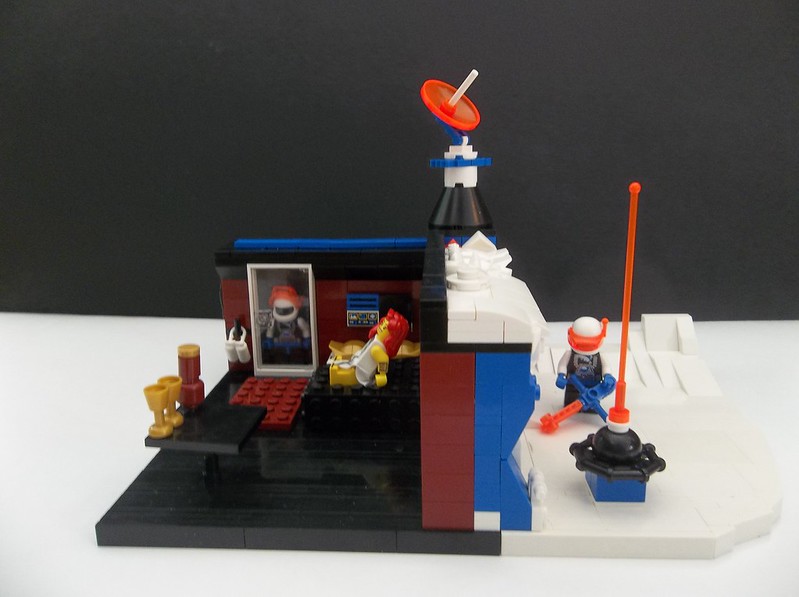 Did someone say “Ice Babe boudoir”?

Though it’s normally only heard in the run-up to Christmas (the radio stations around here seemed to really like it this past year), the song Baby It’s Cold Outside didn’t manage to inspire me then. Probably because the temperature around here at that point was being typically Texan – in other words, unreasonably warm.

Plummeting in the last couple of weeks into the teens Fahrenheit, it’s now that it’s cold outside in real life that I get inspired.

“It’s cold outside” is a perfect, if somewhat understated, tagline for the old Ice Planet theme, and it struck me that it might be fun to make the original LEGO ice princess a boudoir. 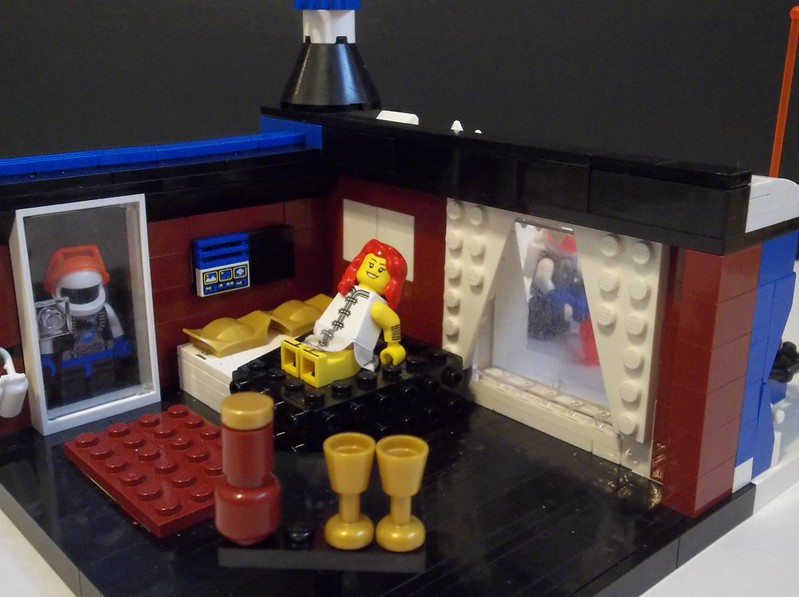 I hemmed and hawed quite a bit over this creation, because “LEGO” and “boudoir” don’t normally belong in the same sentence. The LEGO Group make children’s toys, after all, and the other way around (LEGO in a boudoir) sounds like a recipe for pain.

There’s nothing here that I’d be embarrassed about my kids seeing (I don’t think even third-party custom LEGO makers are crass enough to make minifig prints that are actually risqué), but conceptually, this is definite AFOL territory, and I hesitated before plunging across that particular boundary.

Building the legendary Ice Babe a boudoir is complicated by the fact that I don’t technically own her, but I can certainly reference the original well enough to make it clear. Minifigure head printing has evolved considerably since those early days (she may well have been the first ever specifically female minifigure in a theme) and those first steps beyond the original smiley look a bit crude now, especially the female ones. I think an update is not out of order.

An Ice Planet living space (especially one with the word “boudoir” attached to it) begs the question of what sleeping quarters will look like in the future depicted by old LEGO themes. How exactly do you make a bedroom that looks Ice Planet-y and recogniseably a bedroom, let alone warm and cosy?

Obviously the Ice Planet theme’s colours are all wrong for warm and cosy. Even the trans neon orange, while warm, is aggressive rather than comfortable, recalling anti-glare goggles and suchlike. But if we can’t use Ice Planet colours, how do we make it clear that this is an Ice Planet creation? 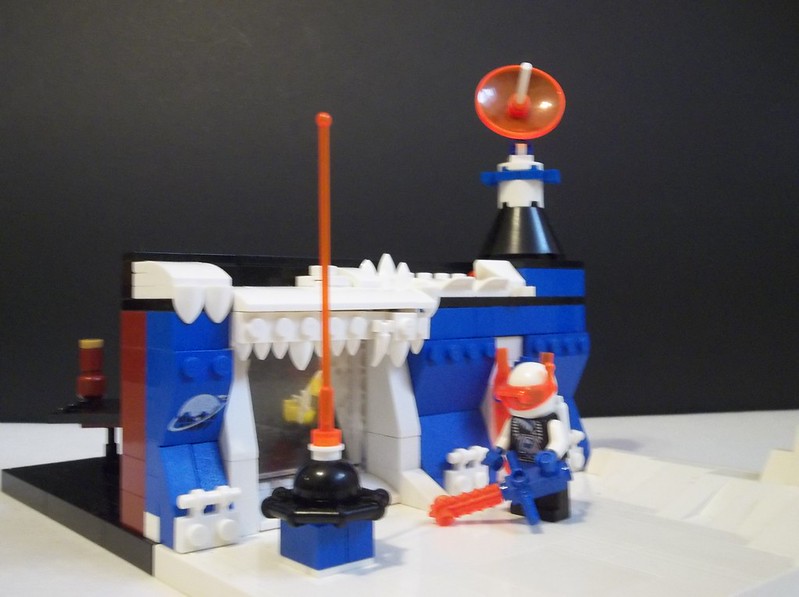 From the outside this is classic Ice Planet, with mostly blue construction, deep-frozen white landscape, icicles at the window and trans neon orange highlights. From the inside, it’s a warm, stylish bedroom with just a few Ice Planet touches to unify the model. The window is clear rather than traditional Ice Planet neon, but that’s the way I planned it because the window was one of the first conceptual parts of this creation and you have to be able to see through it properly. After all, calling your creation “Baby It’s Cold Outside” is rather futile if you can’t see the outside.

This creation also marks the first usage of some of my Christmas-acquired new-to-me elements. And the first new element to make it into a MOC is… Sensei Wu’s muumuu. 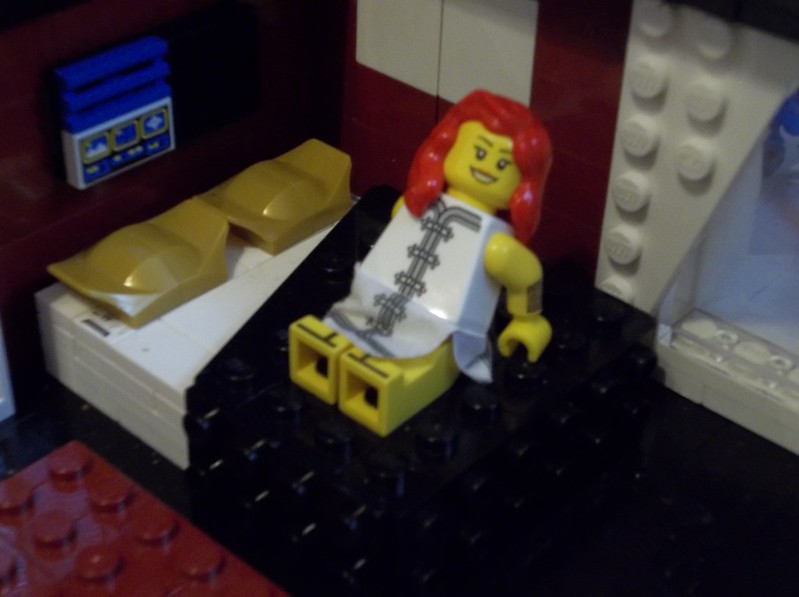 Honestly, if you’d told me on Christmas Day to rank my new elements according to how likely I would be to MOC with them, that’s the absolute last element I’d have picked. I’d have selected the 1×1 round tile with vertical bar, or the 1×1 round plate with handle from the Darth Vader Transformation set. Even Garmadon’s jungle pauldron would have ranked higher.

However, Sensei Wu’s fabric robe is exactly what I need to be my Ice Babe Mark 2’s nightdress. Together with the arms and legs from the Warrior Goddess (never thought I’d use those either), real-Nya’s face and a vivid red hair element possibly from one or other variants of Poison Ivy – perfect neo-Ice Babe in a nightgown!

I did experiment with Cavegirl’s hair, but while it looks nicely sleep-fuzzled and untidy I decided that the vivid scarlet was a better referent to the original Ice Babe. 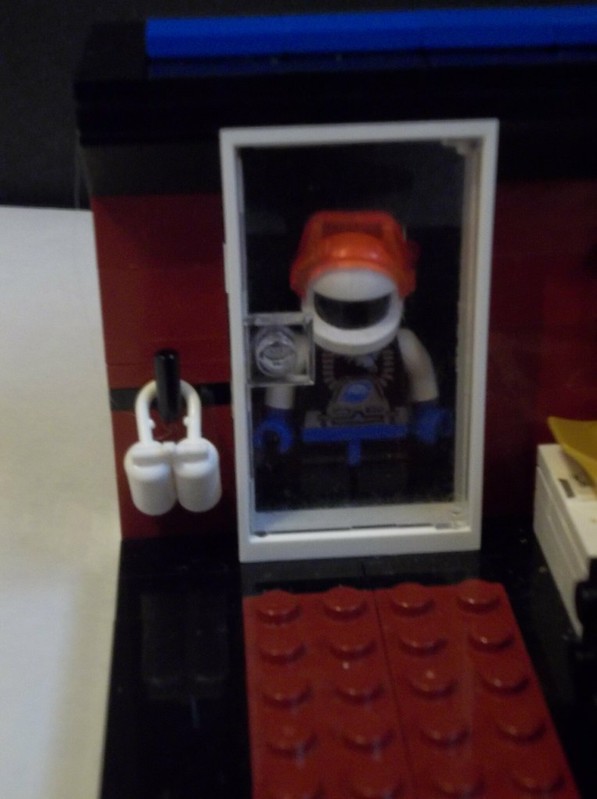 I particularly wanted the Master Falls set for Christmas because I always feel like I lack pieces for making scenery, and now here I am building my most sophisticated scenery-type build yet (ie not a vehicle) and due to the nature of the scene nearly all its elements are the wrong ones to use. Go me.

Including my first interior SNOTwork baseplate, this has been skill-stretching on many fronts. I almost never build LEGO interiors or furniture; my element inventory is fairly geared to vehicles and creatures. So I had to work out how I was going to build the bed, the table, that carafe (LEGO bottles just look too dinky next to the glasses)…

And on top of that I had to work out how I was going to communicate it visually that this is an Ice Planeteer’s bedroom without making it look chilled and sterile. And hopefully keeping the coordinated look of a stylish lady’s quarters. You could, for example, leave a neon orange ice saw standing in the corner, but it would totally destroy the effect. In the end I decided that I had to have the Ice Planet spacesuit in a closet to unify the interior with the exterior, but even that looks just a little out of place.

Of course, then I got into trying to parodise the song for LEGO. “I’ll take your hat; your hair as well…”?

And that led to this modification of my original build: 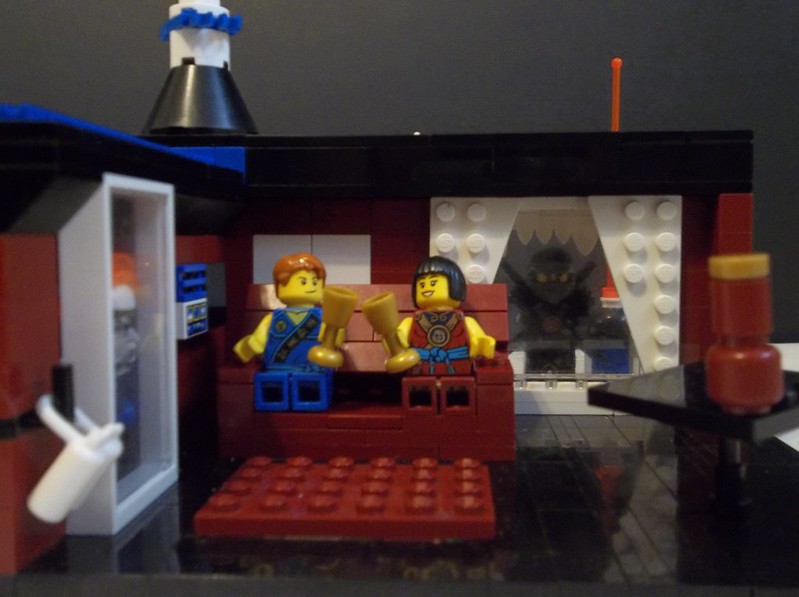 I’m calling it, obviously, “Baby, it’s Cole outside”. That duet has to be sung by Nya and Jay, but a Ninjago bedroom scene seems like a step too far, so I built them a couch to sit on.

It’s less unified and intentional than the original build, because it still has all of the Ice Planet touches all over the place.