I know “The Joker” is a very popular song from its era, but it’s never really scratched where I itch, personally. But when the first line came on the radio as I drove to my LEGO User Group meeting, I started thinking about the possibilities. My personal builders’ rallying call is something along the lines of “Space Everything”, so… space cowboys. Literally. 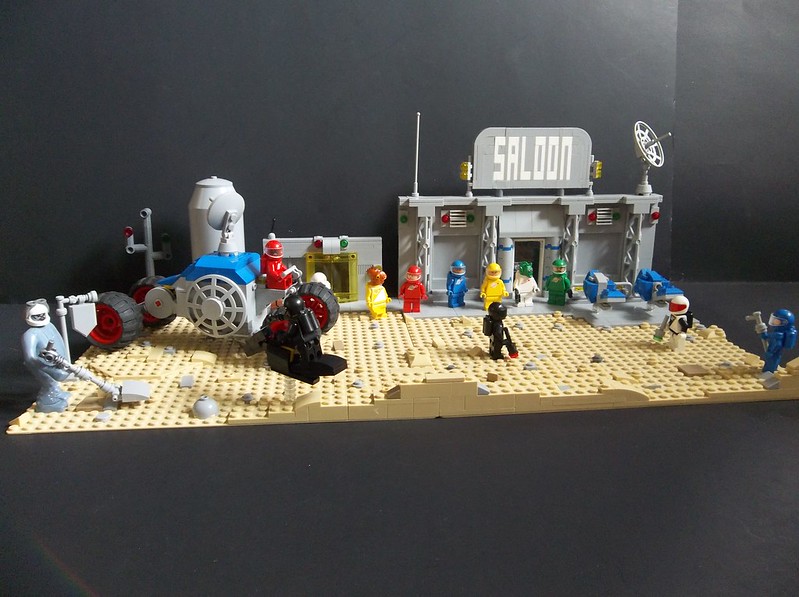 Shootout at the Space Corral

As an Englishman living in Texas, I’m surrounded by cowboy culture. The Fort Worth stock show and rodeo. People who wear cowboy boots. People who wear stetsons. Everybody and his brother’s cousin’s dog in their stupid pickup trucks. People who actually own cattle – in the Dallas-Fort Worth metropolitan area, which is one of the larger urban conglomerates in the entire US. The whole Western genre. The entire Country music scene. Now, there are a few good Country songs, and I enjoy the occasional Western, but really, the entire cultural landscape is as alien as HG Wells’ Martians tramping through the English countryside.

There are two basic ways of dealing with the alienness: assimilation or resistance. Either you assimilate and learn cowboy, at least culturally speaking, or you return to your cultural roots and become a sort of professional Englishman.

Resistance is not futile. 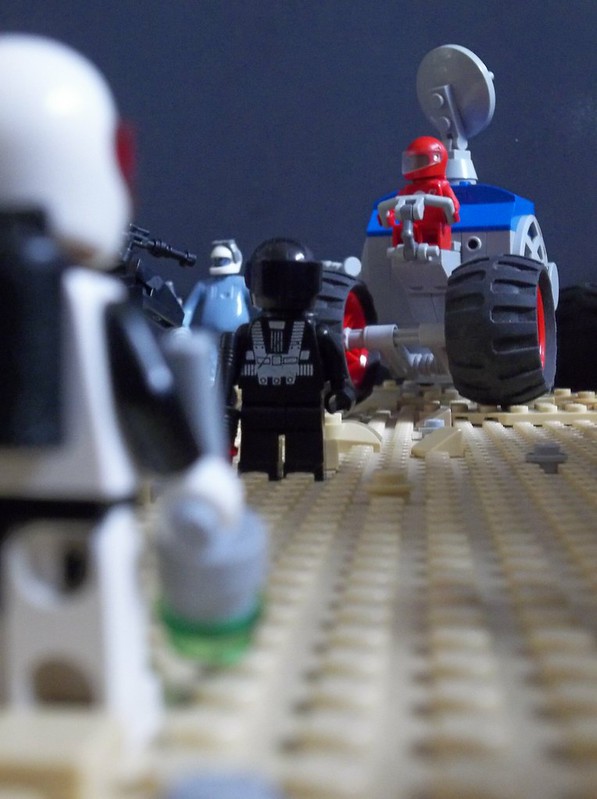 A creation like this could be taken as either the product of a final blended assimilation of worlds, or a sort of ironic joke on the whole subculture. In actuality it’s something of both. Merging different genres is something I do, and usually results in an interesting creation, but there’s a certain amount of visual irony involved in the Blacktron vs Space Police shootout, the rover shaped a bit like a stagecoach and the robot cactus. And the horse-shaped antigravity speeders tethered outside the saloon. 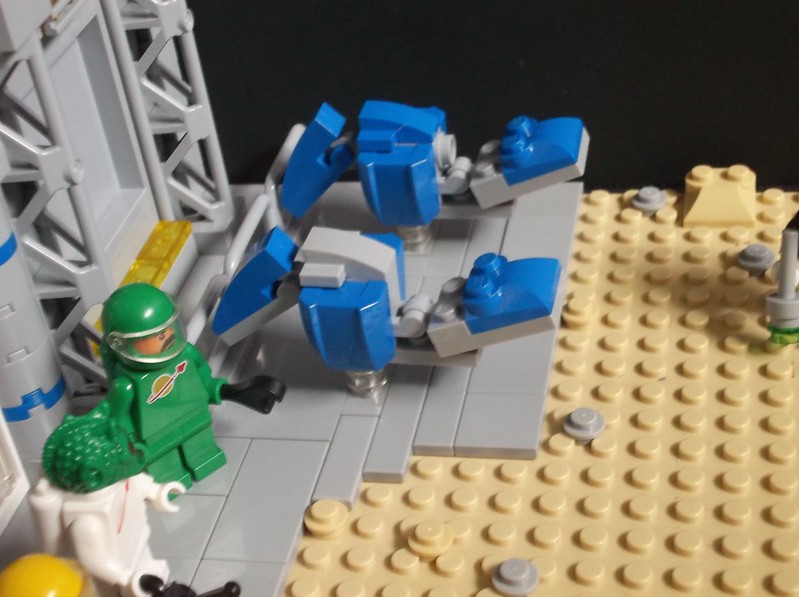 Mustang speeders outside the saloon 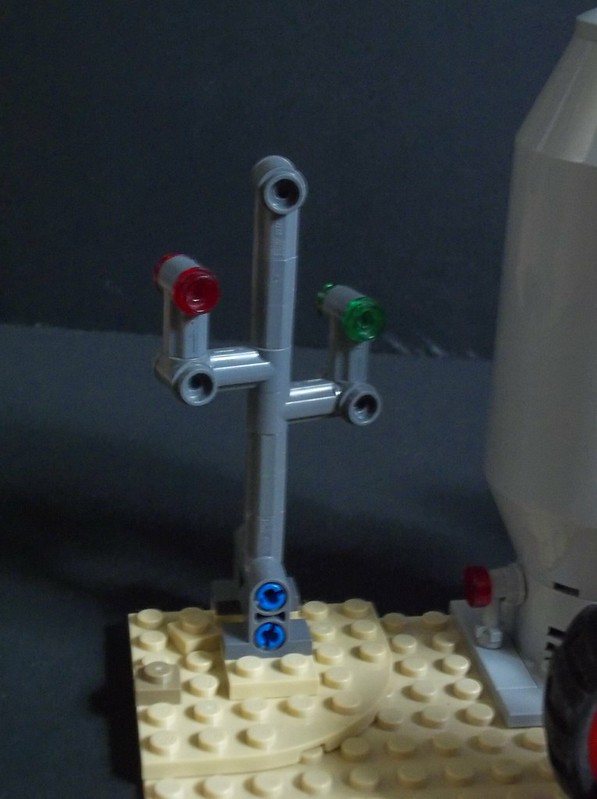 Robot cactus. Because no Western scene is complete without a Saguaro.

Using my two tan baseplates for what I think is the first time (my kids use baseplates a lot more than I do), I started out with the saloon and then expanded it into the stagecoach area. Starting with the Saloon sign and then building a façade like that in any classic spaghetti Western, I initially planned the model structured entirely around the Shootout at the Space Corral, but then the model started to get overpopulated with minifigures as I added more and more, and I realised I had to expand onto another baseplate.

But the resulting two-plate creation was a bit sparse, so I had to build more stuff. This is not a problem.

If I had four or five of the Gungan steeds from the Phantom Menace sets, they’d make a pretty good herd of alien cattle, but I don’t have any, let alone 4 or 5. Thus, the stagecoach rover. Building a rover that recalls a stagecoach was actually pretty fun; you don’t see too many Classic Space stagecoach rovers. I think it’s the elevated driver’s position that sells it; the rover itself isn’t all that stagecoachy otherwise. 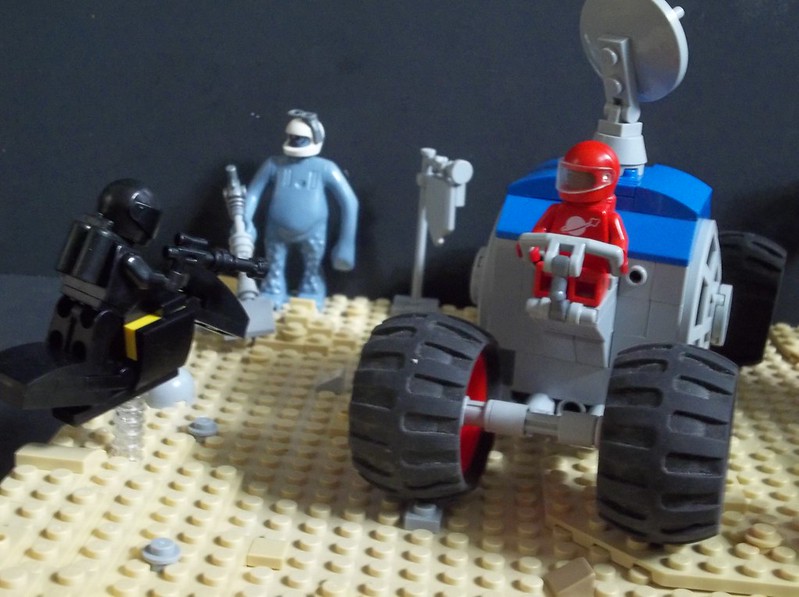 The Stagecoach rover. Not a great angle, unfortunately, but the overall shots give the idea. Note the alien prospector in the background.

It might be fun to expand this still further and incorporate a real Space Cowboy herding Gungan steeds, but those Gungan steeds are relatively expensive for what’s basically a single brick, and I have other purchasing priorities.

I’m quite pleased with the horse speeders. Loosely based on the Nexo Knights’ hoversteeds, they’re my own design because we only got two of the sets from that theme and neither included a hoversteed that I could adapt. Anyway, I prefer to create rather than copying whenever possible. 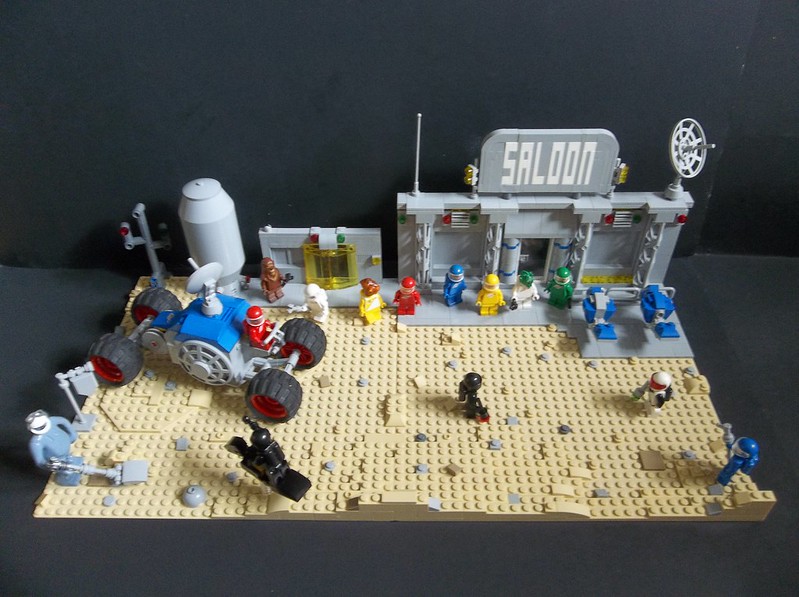