With the Shrike (see previous), I’ve achieved something I never previously thought possible: I’ve reconciled myself to the idea of the Space Police.

Back in 1989, I thought they were ruining my favourite LEGO Space theme.

As a child, I was all about Space LEGO.  I’ve mentioned in this blog before that I’m part Benny; I loved the Classic Space universe with its strange new worlds and its friendly astronauts and its moon buggies and its spaceships.

I remember the introduction of the Blacktron in 1987.  This was the first real “theme” as such, and they looked cool.  Visibly different from the regular Space astronauts in their white ships, these guys had their own awesome triangular emblem and a black-and-yellow colour scheme.  I never got any of the sets, but I loved the look of them.  Ok, “Blacktron” sounded a bit childish, but they were cool.

They also weren’t villains.  Official promotional material showed them working alongside the regular astronauts, obviously different but not necessarily opposed.

Then in 1989 the Space Police arrived and changed all that, giving LEGO its first real factional conflict and making the Blacktron officially bad guys in cells. 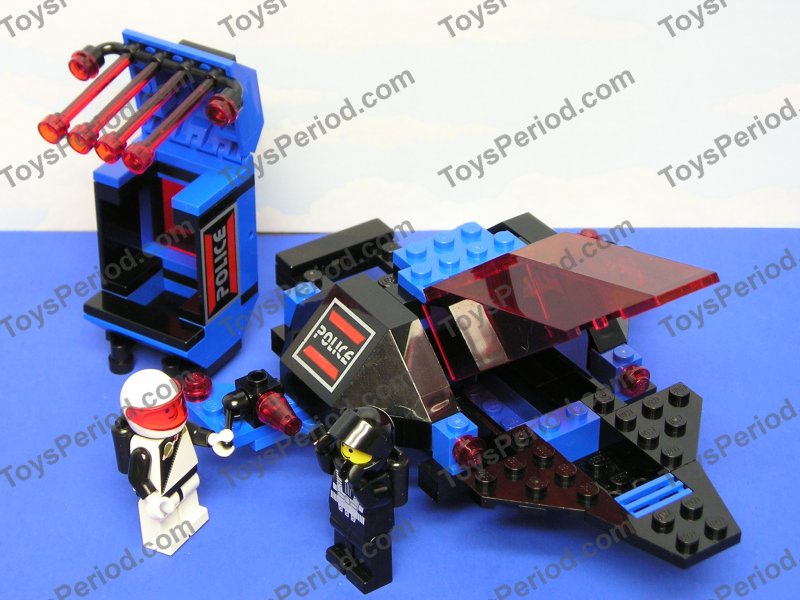 At the time, I actually missed the fact that those were Blacktron astronauts in the Space Police cells.  I was drifting into my personal LEGO Dark Ages, still interested in building, to tell the truth, but becoming embarrassed about it among my peers.  I was paying less attention to the worlds of LEGO.  And anyway, I hated the very idea of the Space Police.

I wanted new worlds and exploration.  If I’d wanted to play cops and robbers with my LEGO, I’d have been into Town.  Space Police was ruining my favourite theme, making it into a Town clone!

Or that’s what I thought, anyway.

And because I went from that into my own personal Dark Ages, I’ve carried a rather silly grudge against the Space Police all this time.

In my mind, I conflated the original Space Police with their ugly second-generation colour scheme (mostly grey with green windshields), and when I returned to LEGO as an adult and realised there had been three separate Space Police themes, I was kind of disgruntled.  How could that ugly grey-and-trans-green theme spawn not one but two successors?  Especially since the incredible Blacktrons only got one successor, and the excellent Ice Planet only lasted a year.

Since then, I’ve started writing stories on the LEGO.com forums.  Set, of course, in my favourite Classic Space milieu, I’ve come at the whole thing with an adult’s viewpoint and an adult’s understanding of human nature.

If humans are in space, they’re still going to be humans, with all of the conflicts and problems and inner darkness that entails.  This was what Star Trek always got wrong.  Just because you have replicator technology it’s not going to make crime go away.  Someone’s still going to steal a spaceship, or rob someone else, or sue them because their targ crapped in the air recycler, or smuggle banned nanotech into a restricted zone, or cheat on their spouse, or take murderous revenge.

And so if humans are in space, we are going to need a Space Police.  Besides, they add a wonderful amount of background colour and help to convey the idea that this is a galactic civilisation, not just a small band of explorers.  There are going to be hairdressers and doctors and paramedics (maybe they should do a Space Rescue line?) and artists and lawyers and news reporters and, yes, police.  Someone has to kick danger in the teeth for the sake of justice.  This is an inherently good thing, a noble calling to the cause of righteousness.  It’s something I can get behind with a light heart.

So I’ve decided I quite like the Space Police after all.  The Space Police II colour scheme wasn’t great, but the LEGO Group screwed up the Blacktron’s colours in that time period, too, and I still like the Blacktron.  But the black/blue/trans red of the originals is actually pretty cool.

So I’ve been making some more Space Police hardware.  The little one I’m calling the Vindicator; it’s designed as a sort of orbital motorcycle cop equivalent.  An extremely agile little spaceship able to manoeuvre around ponderous giant freighters in pursuit of a bad guy in the crowded spacelanes of a major world.  Ok, it looks more like a helicopter, but the inspiration was police motorbike.

The big one is the Peacemaker-class Cruiser.  I consider it possibly my best spaceship yet; it’ll get its own post on this blog.

Space Police version of the Shrike

And the Space Police version of the Shrike Pursuit Ship you saw last time.  Now all I need is a regular patrol-car kind of ship.  And maybe some land vehicles.

Introducing the Shrike-class Interceptor. As what may be a first for me, I’m posting it here first before I show it on LEGO.com.

The Shrike is a two-seater high-performance spacecraft of the Federation, used by both Space Fleet and the Space Police. Its distinctive angled, semicircular wing configuration makes it fairly recogniseable, and whether they are dealing with the Fleet version or the Police version, enemies of the Federation find it one of the most formidable small- to medium-sized ships in space.

After aspect of the Shrike showing the engines

Two powerful engines drive the ship through space at high velocities, and though its agility is merely respectable, the Shrike’s high burst speed and capability of high sustained speeds (due to its high-capacity fuel tank) make it an excellent pursuit craft. Indeed, the Space Police typically refer to Shrikes simply as “Pursuit Ships”.

Space Police version of the Shrike

The Federation bureaucracy is not always very imaginative when it comes to the naming of ships, and the Shrike-class is one of the worst offenders. Its official designation is the bureaucratically bland “Two-Man Fast Orbiter”, though even on official Federal documentation it is typically known by its common name of “Shrike-class Interceptor”.

The vessel is armed with a pair of powerful beam lasers (occasional refits may use proton cannons) in the downward-angled wing sections. The standard laser armament is powerful enough to deal with most threats, whether Blacktron strike craft or large rogue asteroids.

High-powered particle screens prevent impact damage from micrometeorite strikes and other small space debris; these are stronger than on most ships this size and add to the craft’s high velocity envelope.

The cockpit seats two crewmembers in relative comfort; a plus for the extended patrols and pursuits sometimes flown by the Space Police. The seats are staggered, with the forward crewmember seated lower than the rear crewmember. This allows both pilots excellent visibility, and allows the ship to be effectively piloted from either position.

Behind the cockpit section, the Shrike includes a small cargo area accessed via a dorsal hatch. Though too small for a prisoner without constituting Cruel and Unusual Punishment, it can be used to stow a variety of mission gear or tools and supplies.

The Shrike‘s main drawback is that the high-performance nature of the craft requires frequent maintenance, making the craft unsuitable for exploration missions beyond the limits of proper Fleet and Police basing.

This ship is something of a personal milestone for me.

Up to this point I’ve never really liked or got into the Space Police. I remember them from my youth as the guys that more or less ended LEGO Space as I knew it. As a kid, I wanted interstellar (or at the very least interplanetary) adventures on distant worlds, seeking out new life and new civilisations, not some kind of galactic law enforcement. If you wanted to play police, that’s what Town was for. Bringing in Space Police seemed like it was taking everything I loved about the Space theme and junking it to make it more like Town.

Also, it was with the advent of the Space Police that the awesome first-generation Blacktron fleet went from intriguing second human presence in space to cookie-cutter bad guy. I liked them “different but not necessarily opposed”.

It’s taken me until now to get over that initial rejection of the idea of Space Police, but apparently I’m over it now to the point where I’m willing to make a Space Police model, even if it’s just a recoloured version of the Classic Space one.

And it looks so handsome in that blue-and-black livery with its transparent red windows that I might just make some more Space Police stuff.

Though what I’d really like to do is make the Classic Space Shrike in real bricks. I’ll have to price it up and investigate…