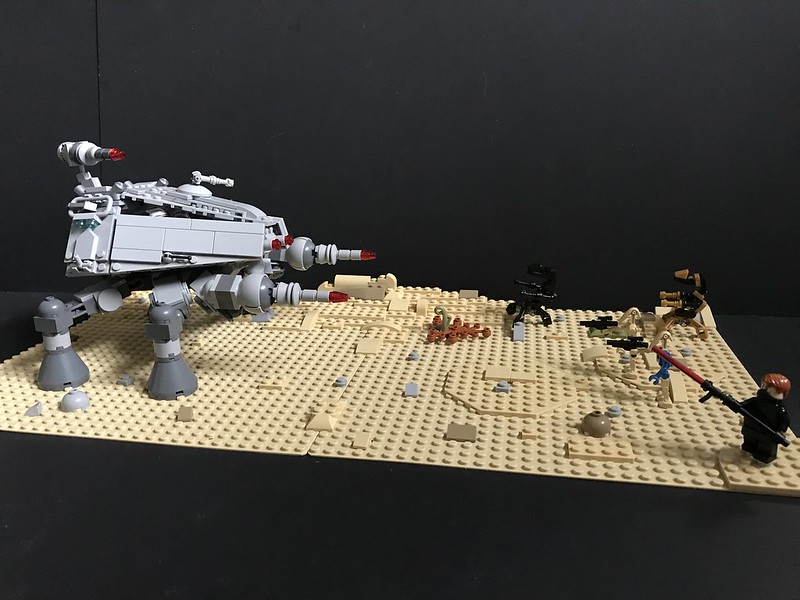 The All Terrain Medium Enforcer (AT-ME) was a Clone Wars-era armoured walker of the Galactic Republic, sometimes called the “Clone Battlecrab”. Bearing some surface visual similarity to the heavy artillery AT-AP pod walker, the AT-ME was designed for close-range combat, where its heavy armour, high-power lasers and medium antipersonnel blasters could be utilised effectively without the need to stop, position a supporting leg and fire the heavy mass driver of the AT-AP.

With four short legs rather than the three longer ones of the AT-AP, the AT-ME was slower than the artillery walker but had better endurance and did not need to keep stopping. 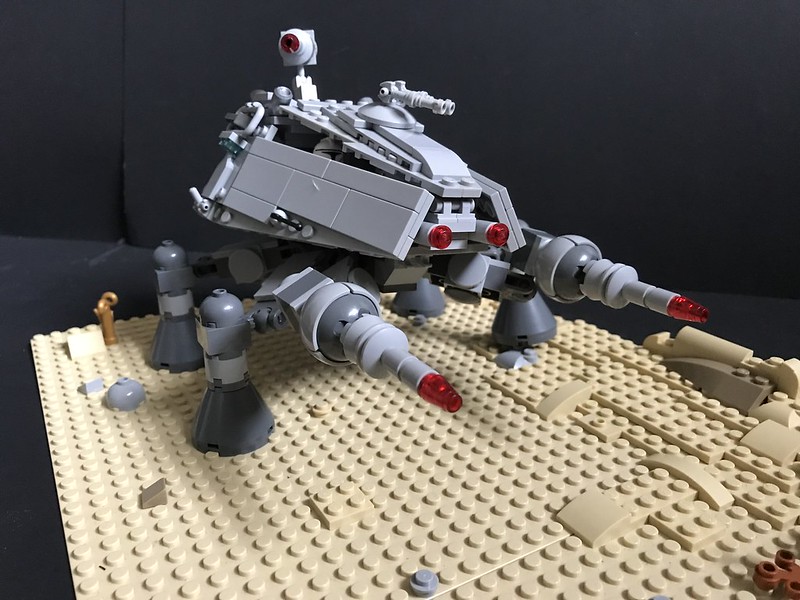 The All Terrain Medium Enforcer

Two of the primary laser cannon armament were emplaced in movable pods forward of the four legs, giving the walker a crablike appearance and earning it its “Battlecrab” nickname. The third, slightly smaller primary beam was located in a scorpion tail-like appendage attached dorsally, while two forward-firing secondary beams and a pair of antipersonnel blasters pintle mounted to the roof completed the AT-ME’s armament. 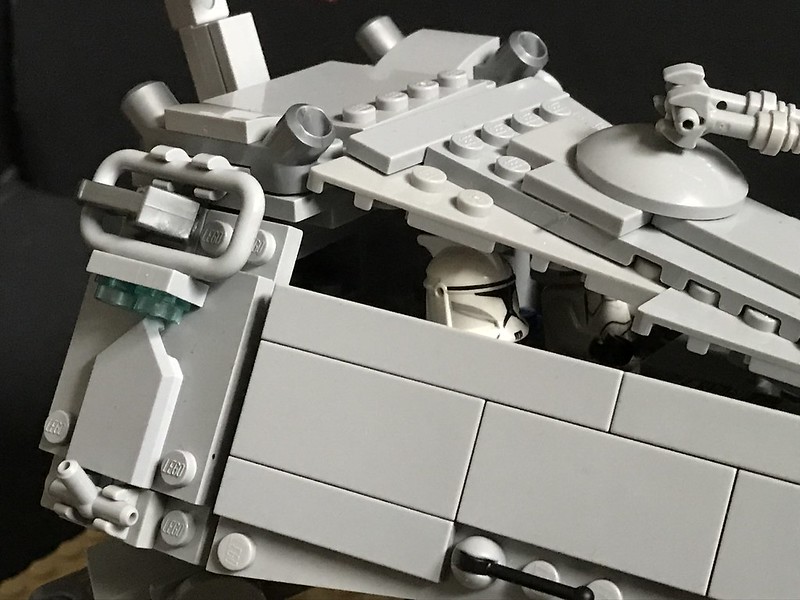 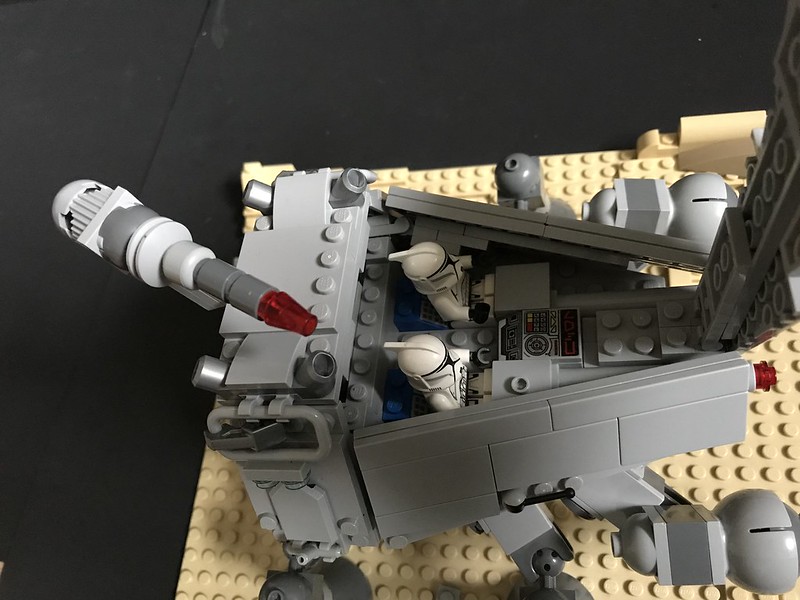 Despite surface appearances, the hulls of the AT-AP and AT-ME walkers were not identical and the two vehicles could not use one another’s hull plating in their construction.

Seen here in operation on Tatooine against a group of Separatist battle droids led by the fallen Jedi calling himself Darth Maraud, the AT-ME is more than a match for over twenty times this number of battle droids, but against a full-blown Dark Jedi with Sith training, the battle is more evenly matched. 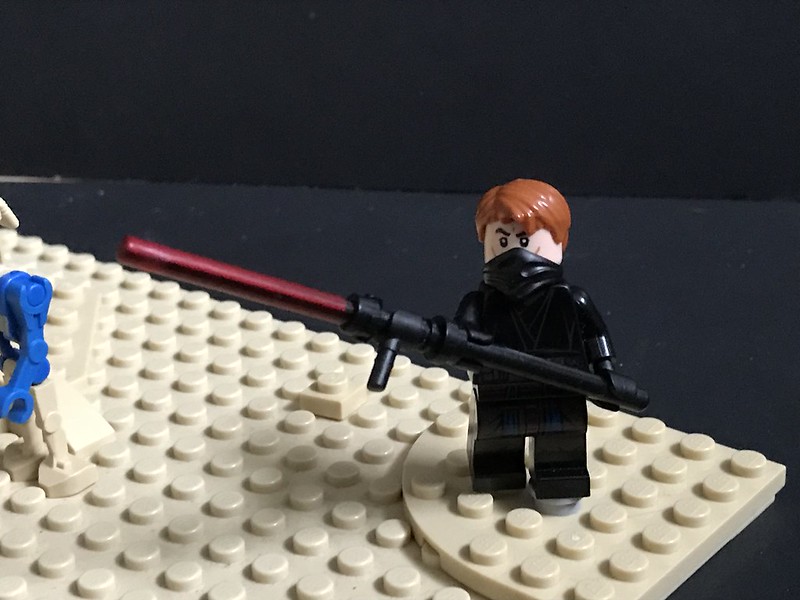 I’m not a great Star Wars builder, and even less so a builder of Clone Wars-era hardware. We have precisely two Trade Federation battle droids in our household inventory, and the same number of first-generation clone troopers, and while I like the look of some of the Clone hardware of that era, (AT-TE, Jedi interceptor, Count Dooku’s ship), other hardware is weird and ungainly-looking (Republic gunships, AT-TE transporters, Hailfire droid tanks). 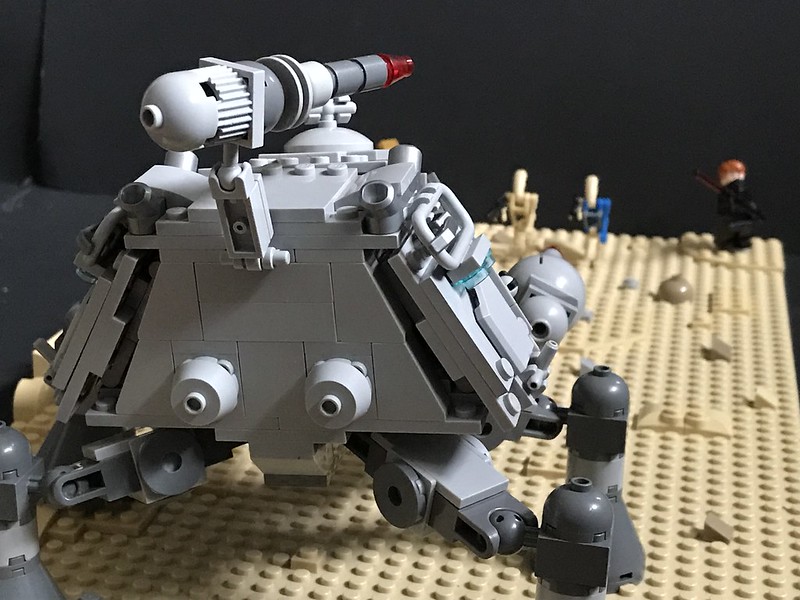 Rear aspect of the AT-ME

So this build started out being crewed by a couple of Classic astronauts.

It works as a Classic Space battlemech, but I kept looking at it and thinking: “You know, this would be much better with clone troopers”.

I was right; it does. And then, of course, I had to reassemble our battle droids as an opponent, and build a couple of droidekas, and then I couldn’t resist adding my Sith mini-me Darth Maraud.

Droidekas are awesome, and I’ve never really felt comfortable with the scale discrepancies involved in the standard LEGO version, so I decided to build my own. The legs are a little bulky for droidekas (maybe they’re an experimental sand version?) but they seem much more like they’re at a proper scale. They took several tries over two or three days to get right, but I think they’re as good as they’re going to get. 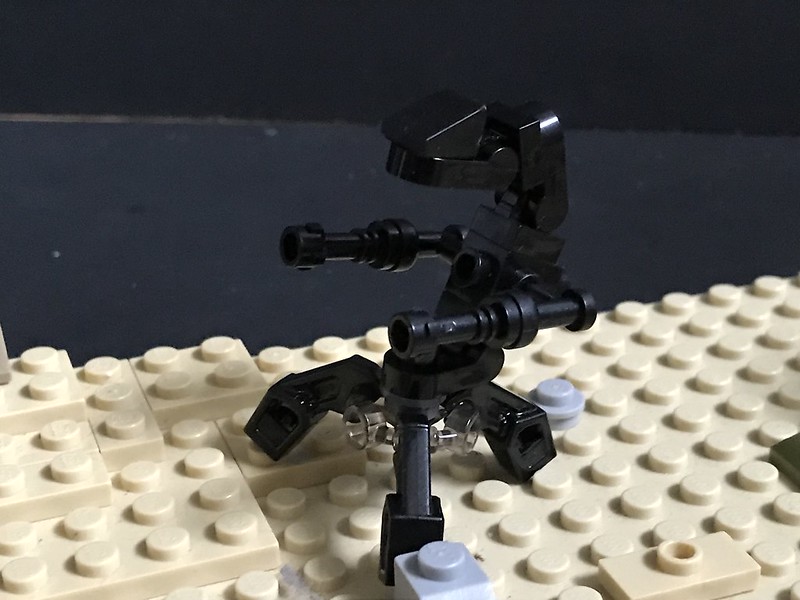 “They are no match for droidekas!”

Darth Maraud is my own Sith character. Technically, he ought to be a Dark Jedi and not use the Darth title, because of the strange Rule of Two that the Sith operate under in this time period. But I like the Darth title, so I’m twisting the canon into the usual pretzel shape invoked to clear any weirdnesses that contradict its diktats. In this particular case, I’m saying that he was originally a Jedi who became disgusted with the injustices and bureaucracy of the Republic and the perception of political manipulation by the Jedi Council and secretly turned his back on the Jedi Order. Discovering ancient Sith manuscripts in the Archives (placed there to prevent them seeding Sith sentiment in the wider populace), he renounced the Order, swore allegiance to the Sith and took the name Darth Maraud. Fleeing to the Confederacy, he was most probably killed in one of the many battles of the Clone Wars. 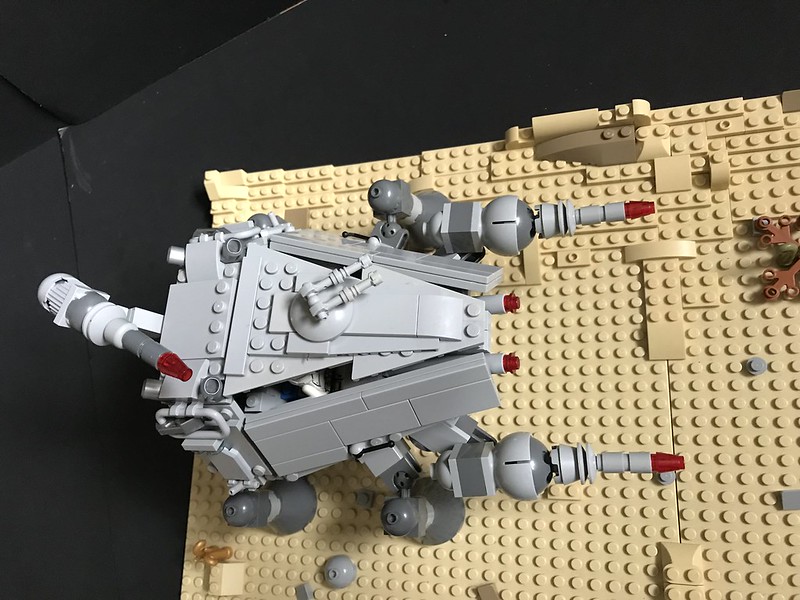 Following the Sith tradition of having interesting lightsaber designs, Darth Maraud’s lightsaber is based on a glaive-like polearm design which is probably a little unwieldy in a real fight against someone who’d fought against one before, but would have the advantage that its moves and techniques would be unfamiliar to your average standard saber-wielding Jedi. Also, it’s got a reach that dramatically outranges a standard lightsaber, which is always a plus.

And since I’m calling the Clone walker the “All Terrain Medium Enforcer”, “eAT-ME” seemed like the perfect post title. 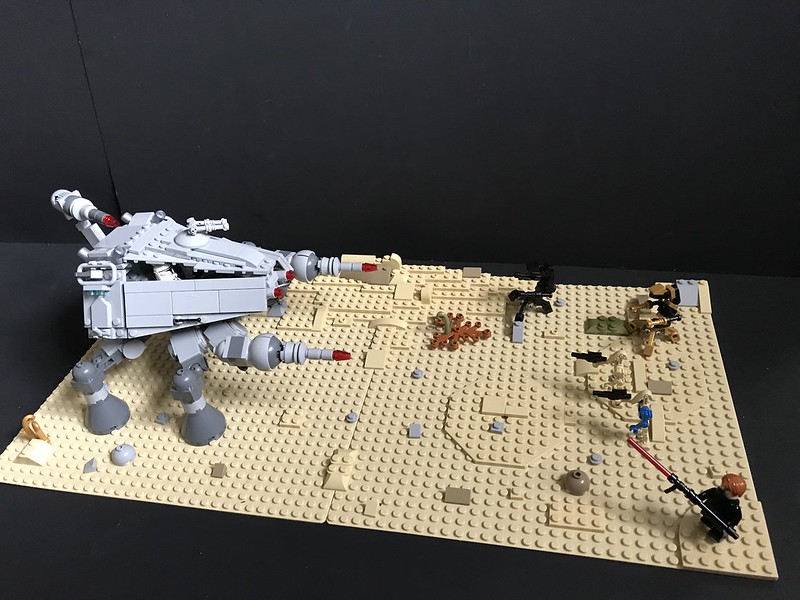 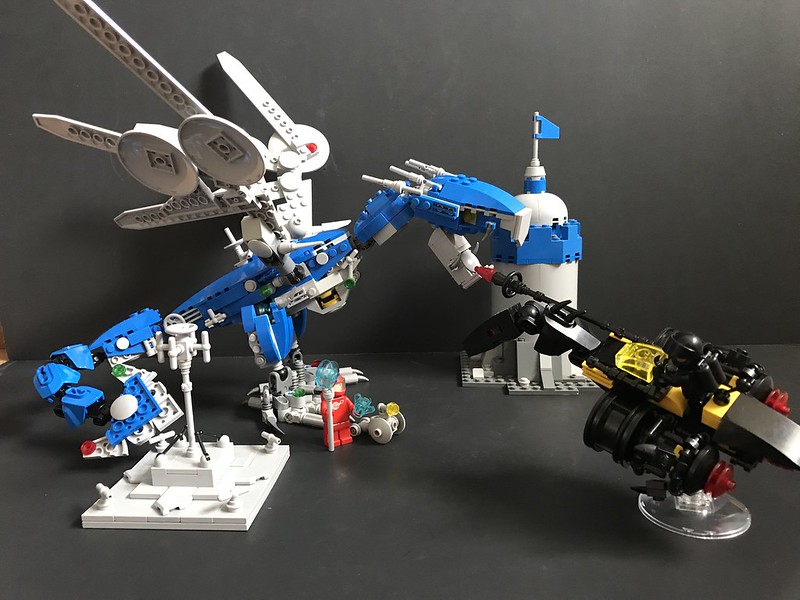 The Black(tron) Knight faces off against the fearsome dragon Neoclassica

The combination of futuristic space technology and high fantasy has of course been done before. LEGO has its own slightly cringeworthy Nexo Knights, but even the Star Wars franchise is effectively high fantasy in a tech setting, with its Sith and Jedi wizards and its fighter pilot knights.

I didn’t think much of Nexo Knights’ execution, but the concept is sound. And because it’s me, the high technology in question has a better-than-average chance of having something to do with the Classic Space/Blacktron metatheme. 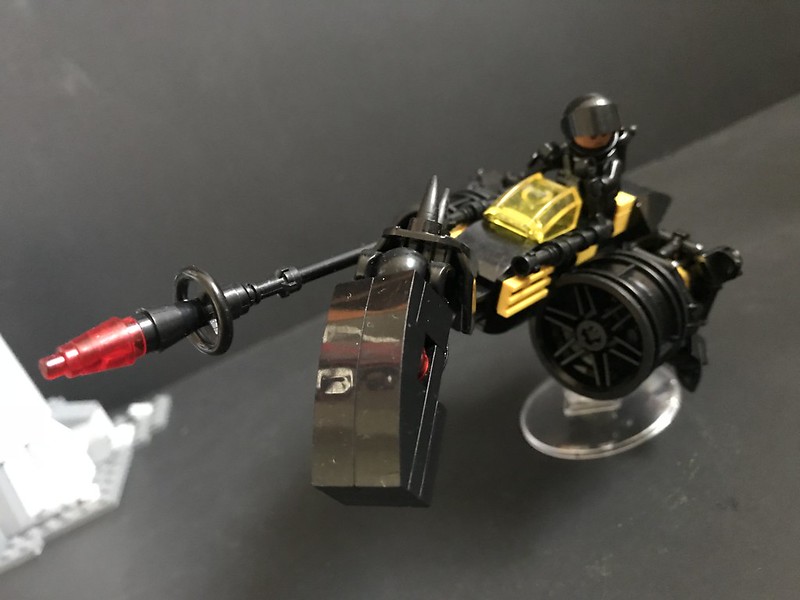 In this case, I’ve perhaps subconsciously channelled my flipped Brightly Coloured Tyranny take on the original LEGO Space universe, because the knight is a Blacktron and the draconoid (“draco” + “mechanoid”) is in NCS colours. But building a Black(tron) Knight references the Classic Castle prototheme’s original bad guy as well as the Classic Space universe’s primary adversaries. 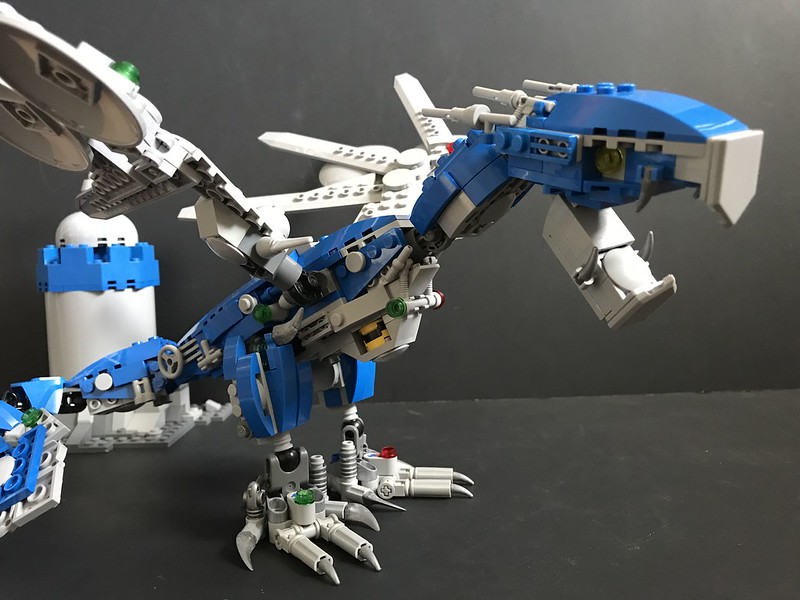 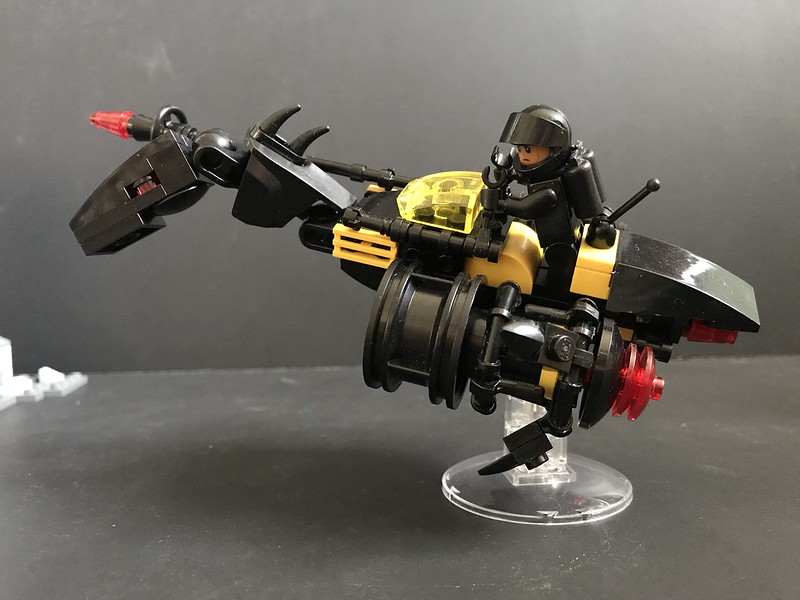 The difference is mostly that the previous dragon was an Elemental Dragon of the “Element” of Classic Space. In view of the weird stuff considered “elements” by the various LEGO themes – lightning, ice (as well as water), sound, mind, amber, love – having an element of Classic Space is not something I consider much of a stretch, but that’s beside the point for this creation. This dragon was created in order to serve as an adversary for the Black(tron) Knight.

The hover horses were one of the few bits of Nexo Knights that I thought were well thought out and well designed. So I decided to make my own version of a mostly horse-shaped speeder; bigger and hopefully more impressive than the Nexo hoversteed. I went Blacktron initially because of the colours of my CCBS elements, but the idea of a Black Knight that’s a Blacktron seemed like a good one. And that meant either a Neoclassic Space or Neo-Futuron dragon, unless I built a second grav-destrier and generated a joust.

I still might; a Neo-Futuron grav-destrier is more probable with my element inventory, or possibly a Neo-Space Police I version.

Until then, the Black(tron) Knight is fighting an NCS dragon and red-spacesuited technomancer. 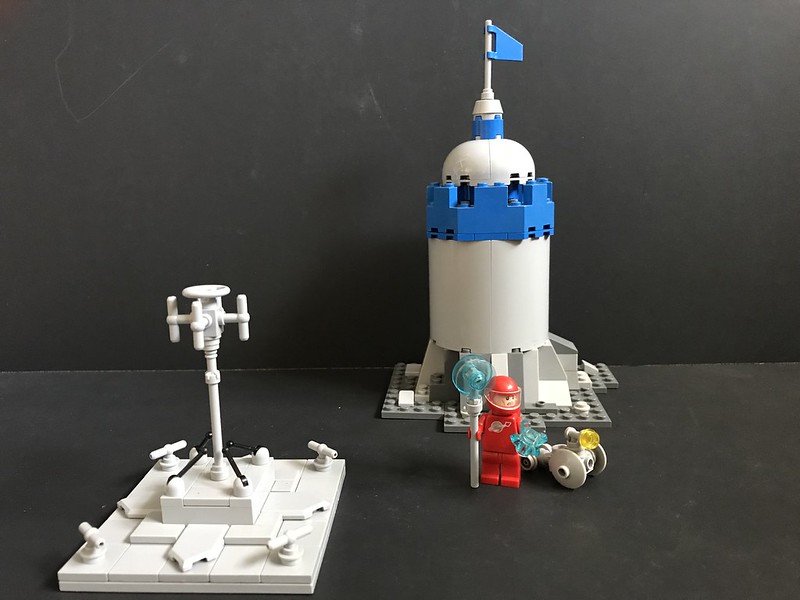 The technomancer was an afterthought, actually. As a set, this would be a bit boring without at least one more minifigure, and a pilot for the dragon didn’t seem right this time around. But a high-tech wizard equivalent? That has possibilities… 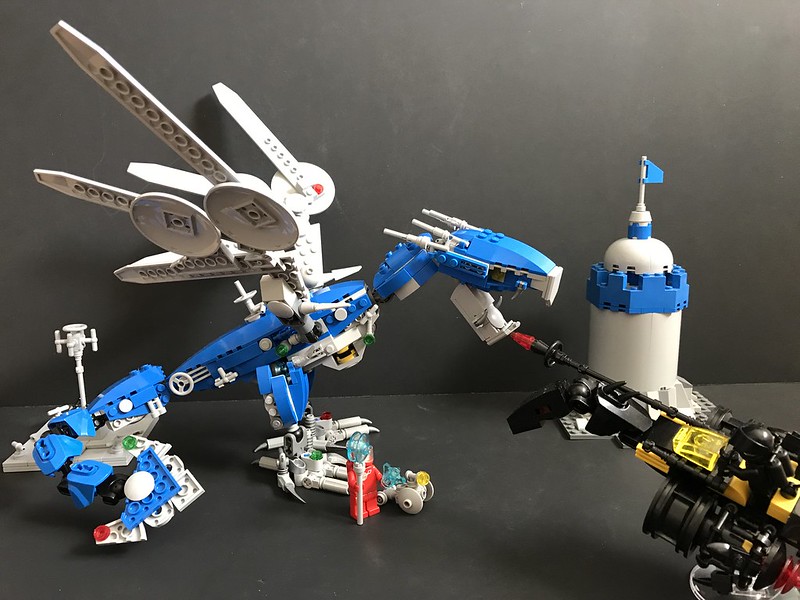